Ooooh, and lets not forget Manx Moon Stamps 'cos everyone loves an anniversary 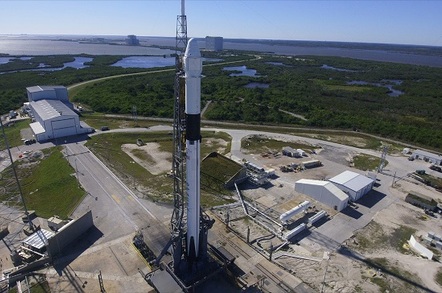 A SpaceX Dragon at the launchpad (credit: NASA)

Round-up SpaceX's next ISS-bound launch was delayed, a new asteroid crater was made and some stamps for Apollo nostalgia fiends landed. El Reg has collated the past week's event in space for your delectation.

While the famously taciturn company continued to pick up the pieces left over from the 'anomaly' that resulted in an orange cloud above the test site and the Crew Dragon capsule reduced to fragments, day to day business continued with, er, another delay.

This time the issue was with the static fire test of the Falcon 9 booster, which will be used to send the cargo version of the Dragon spacecraft off to the International Space Station (ISS) next week. The plan had been to test the engines of the booster on Friday 26 April, with a view to launching tomorrow.

However, SpaceX opted to delay its test, which means astronauts aboard the ISS will have to wait another day to receive the CRS-17 Dragon and its cargo of delights. As well as experiments within the pressurised Dragon freighter itself, the mission also includes NASA's Orbiting Carbon Observatory 3, which will fly in the trunk of the Dragon and be mounted on the ISS.

The delayed test was successful, setting up the company for a launch on 1 May at 03:59 ET.

Confirmed: Hayabusa2 did indeed make a dent in Ryugu

Boffins in Japan have confirmed that the impactor released by asteroid-bothering probe Hayabusa2, created a crater on the surface of its target asteroid, Ryugu.

The JAXA gang were confident that the Small Carry-on Impactor (SCI) released by the probe had done its stuff, but the imagery confirmed the carnage. In fact, the size of the crater caused some raised eyebrows among the scientists.

[CRA2] Crater formation where the Small Carry-on Impactor collided with Ryugu has been confirmed! These images compare the surface before and after the SCI collision. pic.twitter.com/BZPYlHhSjs

The team estimated the damage to be 20 metres wide, and said "We did not expect such a big alternation [sic] so a lively debate has been initiated in the project!"

Having exposed "fresh" material, the plan is for the probe to check out the area before descending to collect some more samples. For the time being however, having completed its survey at an altitude of 1.6 – 1.7 km, scientists sent Hayabusa2 back to its 'home' position, about 20 km from the asteroid’s surface.

Hayabusa2's time at Ryugu will come to a conclusion by the end of the year following one more touchdown and the deployment of the MINERVA-II2 rover. The probe's precious samples should, if all goes to plan, reach Earth by the end of 2020.

Stamp collectors, start your engines. The Isle of Man Post Office has a treat in store

As the 50th anniversary of the first boot-prints on the lunar surface approaches, the Isle of Man Post Office has pitched in with a set of eight stamps covering the early Apollo missions, available from today. A second issue, covering the later ones, will appear in 2020.

It will be interesting to see how Apollo 15 and its awkward history, when it comes to Postal Covers, is dealt with in the second batch of designs.

The Isle of Man has form when it comes to moon stamps. To celebrate the 40th anniversary of the moon landings, in 2009, it issued a set featuring the paintings of the late Apollo 12 and Skylab astronaut, Alan Bean. This time around the Post Office has enlisted the support of former Johnson Space Center Director, George Abbey, to issue an, er, stamp of approval on the things.

Of the 50th anniversary issue, 86 year-old Abbey said the stamps were "truly outstanding and I am sure they will be well received."

While we struggled to spot an Apollo 1 reference in the first eight designs, we were happy to see Apollo 12 rounding out the set, replete with an image of the Surveyor lander with the lunar module of Pete Conrad and Alan Bean in the background.

One can but hope that by the time the 60th anniversary rolls around, the imagery might be a bit more contemporary. ®