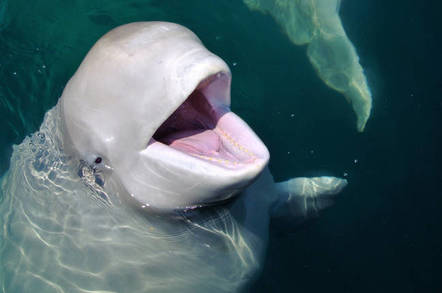 Norwegian fishermen are being harassed by an apparently Russian-trained Beluga whale.

The cetacean spy was wearing a harness with a fitting for a camera. It seemed quite used to human contact and came up next to the boat begging for food.

Joergen Ree Wiig of the Norwegian Directorate of Fisheries told Associated Press: "'Equipment St. Petersburg' is written on the harness strap, which features a mount for an action camera."

He said fishermen reported the tame white Beluga strapped into a tight harness swimming around last week. On Friday, fisherman Joar Hesten jumped into sea to remove the harness.

Professor Audun Rikardsen, from the Department of Arctic and Marine Biology at the Arctic University of Norway in Tromsoe, northern Norway, told the newswire: “it is most likely that Russian Navy in Murmansk”.

The Russian navy has previously used trained dolphins for surveillance and other aquatic activities. The US navy also uses the mammals for mine detection and rescuing divers.

PLUTO SPACE WHALE starts to give up its secrets

Obituary When viral videos had IMPACT