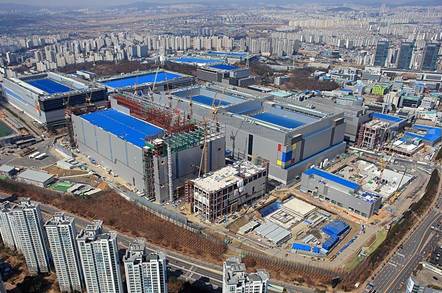 Samsung Electronics will plough Won133tn (£116bn, $155bn) over the next 11 years to develop its logic chip business and boost manufacturing lines to produce those non-memory processors to order for other corporations.

With Intense DRAM and NAND competition - China is entering the business and smartphone growth is rapidly tailing off - Sammy wants to diversify, and will use those funds to inject cash into its unit by hiring 15,000 R&D and production staff.

"The investment plan is expected to help the company to reach its goal of becoming the world leader in not only memory semiconductors but also logic chips by 2030," Samsung said in a statement.

Around 54 per cent of the expenditure will be used for R&D and the remainder for "production infrastructure", the chaebol said. Samsung currently employs 100,000 staff.

Logic chips are ones that carry out some form of logic-based processing, unlike memory chips which simply store a value or present it.

TSMC is currently the biggest contract maker of logic chips: customers include AMD, Apple, Broadcom, Huawei, Marvell, MediaTek, Nvidia and Qualcomm. The Internet of Things market, with intelligent sensors and edge devices, is expected to increase the demand for logic chips.

According to Bloomberg, TSMC invests more than $10bn a year on its business, roughly the same as Samsung spends on its memory manufacturing.

This investment programme is good news and comes at a time when the unfolding story about the breaking Galaxy Fold screens puts Samsung’s technical expertise in a bad light. A weakening phone market hasn't helped Sammy either.

Samsung splashed 29.4 trillion won in capital expenditure in 2018 and 80 per cent of this was allocated to the semiconductor unit. Semiconductors were responsible for the lion share of Samsung's operating profit for the year. ®

Still lagging WDC and Toshiba chip capacity by half