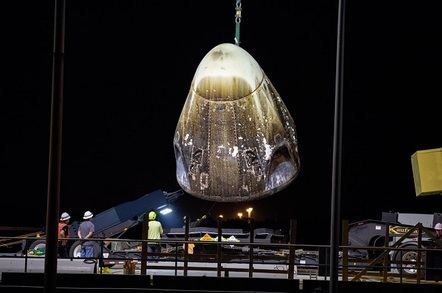 Crew Dragon Demo-1. Unlikely to be coming to a launchpad near you (credit: NASA/Isaac Watson)

Roundup It has been an eventful past seven days in space what with SpaceX making a big cloud o' orange smoke, Cygnus docking, and veteran astronaut Owen Garriott taking his final journey into the black.

SpaceX's Crew Dragon appears to have suffered a significant setback as the spacecraft, previously sent to the International Space Station (ISS), suffered what NASA administrator Jim Bridenstine described as an "anomaly" during a static first test while perched on its Florida test stand.

Also, note that the origin of the blast is not centered on the thruster pods. pic.twitter.com/W53MWlK9hT

While SpaceX's social media orifices remained clamped shut (unlike the considerably loosened sphincters of the engineers watching the disastrous test), the company issued a statement to the effect that the final test performed in a sequence of abort engine checks resulted in the "anomaly".

Large, orange clouds of smoke were seen drifting above the test site.

The SuperDraco thrusters attached to the side of the Crew Dragon are used to perform in-flight aborts. The capsule also features Draco thrusters, which are primarily used on-orbit. While there is no word yet on what caused the incident, close attention will be being paid to those SuperDracos.

Had the tests gone well, the spacecraft would have been used to demonstrate a full in-flight abort atop a sacrificial Falcon 9 in July. That is highly unlikely now, and following delays announced by SpaceX rival Boeing, NASA's commercial crew schedule is once again looking distinctly wobbly.

While nobody appears to have been injured by the incident and no crew were onboard during the tests, the Rapid Unplanned Disassembly of the SpaceX craft will likely push NASA's first crewed mission aboard a Dragon into 2020, joining Boeing. NASA, of course, only has Russian seats for its ISS astronauts until the second half of 2020. A further delay will require ponying up yet more cash and some awkward moments in front of Congress.

The abort system of Russia's Soyuz was memorably demonstrated last year as a capsule was plucked from a failing booster. Like spacecraft such as the Apollo or Mercury, the abort motors are attached to a tower above the capsule, designed to yank 'nauts away from peril. SpaceX (and Boeing) have taken a different route with the location of their abort engines.

The less said about the Gemini and Space Shuttle ejector seats the better.

SpaceX famously bounced back from 2016's Amos-6 launchpad failure, also referring to the boom as an "anomaly". However, it has also seen the landed centre stage of its latest Falcon Heavy topple over on its barge due to high seas and a robot designed to secure the thing not being ready in time for the mission.

Shortly before things went boom on the Crew Dragon front, it was announced that SpaceX's 17th mission to the ISS – CRS-17 – would be delayed. It is now due to launch at 04:22 EDT on 30 April from Cape Canaveral's Space Launch Complex 40.

The schedule was originally 26 April, but 30 April is apparently the most viable date from the point of view of ISS and orbital mechanics constraints. The extra time for SpaceX to perform pre-flight checks will also not go amiss.

Meanwhile, Northrup Grumman's Cygnus left its Virgina launchpad atop an Antares 230 booster at 16:46 EDT on 17 April. The freighter, and its record (for the rocket) 3,450kg of supplies and experiments bound for the orbital outpost, separated from the second stage approximately nine minutes after lift-off.

Also released was a NASA-sponsored 3U CubeSat called the Student Aerothermal Spectrometer Satellite of Illinois and Indiana CubeSat (SASSI2), and 60 ThinSats built by students and sponsored by the Virginia Space Flight Authority.

The NG-11 Cygnus, dubbed the SS Roger Chaffee in honour of the Apollo 1 astronaut, was grappled and bolted to the Earth-facing port of the ISS's Unity module at 07:31 EDT on 19 April where it will remain until July.

The freighter, by then loaded with rubbish, will be left to its own devices in orbit for an extended mission of nine months, during which time it will deploy NanoRacks customer CubeSats before coming to a fiery end in the Earth's atmosphere.

Garriott was part of the fourth group of astronauts selected by NASA in 1965. This group included Harrison Schmitt, a geologist who would form part of the last crewed lunar landing as well as Joe Kerwin and Ed Gibson, both of whom also flew missions to Skylab.

Garriott - a physicist - went on to spend a total of 70 days in space, first as part of the famously hard-working Skylab 3 crew of 1973 (achieving 150 per cent of mission goals) before joining the crew of the ninth Space Shuttle mission, which launched in 1983 carrying a then-record six crewmembers.

STS-9 was commanded by moonwalker and Gemini veteran John Young and was also, as things turned out, his last mission. Young, of course, had his eye on the Hubble deployment mission, but the Challenger disaster put paid to that.

Garriott went on to hold the position of Project Scientist in the Space Station Project Office before leaving the agency in 1986.

Those interested in Garriott's Skylab days could do much worse than check out the footage in the recently released documentary Searching for Skylab. ®