Are you... Are you sure that we make this machine, sir? 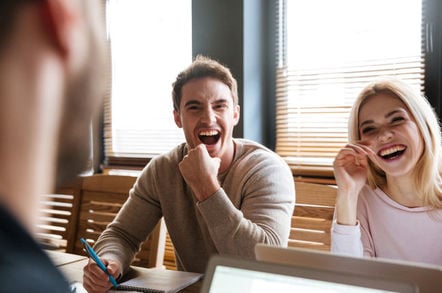 On Call Roll up, roll up, to the best part of your day, nay, your week – On Call, where Reg readers share Eureka moments and gleeful memories in tech support.

This week, we meet "Jean", who was working as field tech support at a minicomputer company when she managed to sort out a rather troublesome call that came in.

Her team was responsible for local users as well as pre-sales technical support.

"It was a great job, and, as you might suppose, there were some pretty funny incidents," she told On Call.

"We all took turns manning the phones during business hours, fielding calls and attempting to resolve problems."

One day, it was Jean's turn and she was struggling to even understand what the reported problem was, let alone figure out how to solve it.

She started out by trying to walk the caller back from what he thought the problem was – "the computer is broken and I need someone out here immediately" – to something that could actually be fixed.

"It was taking so long that, in our open plan office, my colleagues began to gather around me to listen in," she said.

At this point, we'll take a short diversion down memory lane, because at the time Jean was doing this job it was the late '70s.

"In those days, computers had lights and switches on the front panel, and, in order to start the computer, after powering it up, you had to key a very short program (the bootstrap) on the front panel switches," she said.

And so it was that, as she painstakingly walked him through the bootstrap process, she had the glimmer of an idea about what the problem might be.

"I realised nothing he was saying matched anything we sold," she said.

"Finally, in desperation, I asked him to tell me the colour of the front panel switches."

And, sure enough, it had nothing to do with her firm. "It was a machine made by our largest competitor."

To her credit, Jean put him on hold, not to burst into peals of laughter, but to find the phone number for the other company to pass it on.

Only after explaining that he’d have to call another number to resolve the "very difficult problem" did she – and the gathered masses – break.

"We laughed our brains out," she said. "It was delightful."

If you have a heart-warming story of a time you managed to hold back the giggles to help a less tech-savvy user, send it in to On Call. And do the same for the times you failed to hold it together. ®