Surprising absolutely no one at all, Samsung's folding-screen phones knackered within days 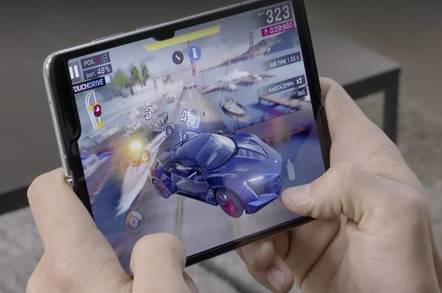 Updated Samsung’s space-age Galaxy Fold smartphones, which you can fold in half to pop in your pocket, are cracking up after just a few days of use.

Good thing these devices aren't on sale yet, and only in the hands of, oh no, journalists to review, who went literally round the bend late on Tuesday in revealing how their on-loan handhelds were failing.

The problem lies with the Fold's foldable screen: the handset's unique, or dare us Brits say, courageous selling point. At first glance, the $1,980 phone has a tall and narrow rectangular display, though when opened out, it sports a 7.3-inch touchscreen.

“Defy the limits of what you can do with our most expansive Infinity Display ever ... Unfold it for more immersion, more multitasking and to seamlessly transition apps from the front display,” Samsung gushed about the thing in its promotional materials.

Yeah, well, it’s more unfold it for immersion into a black screen of death. Several hacks at different publications, loaned devices to review, have experienced malfunctions after using the smartphone just for a few days...

The screen on my Galaxy Fold review unit is completely broken and unusable just two days in. Hard to know if this is widespread or not. pic.twitter.com/G0OHj3DQHw

Mark Gurman, a reporter covering Apple and devices at Bloomberg, reported that one half of the display stopped working. The problem got worse over time until the whole screen died. He’s not the only one. Steve Kovach, a tech editor at CNBC, found that the one side of the screen would flicker on and off.

After one day of use... pic.twitter.com/VjDlJI45C9

There’s a thin, flimsy layer of plastic pasted onto the screens that isn’t meant to be removed: if you carefully read the documentation accompanying the devices, you're told not to take it off.

Unfortunately, like perhaps a lot of normal folks will do, Gurman peeled the layer off because it appeared “removable”, and that’s when his problems kicked in. YouTube tech telly star Marques Brownlee also fell into the same trap, leaving the screen on his handset completely frazzled.

I got this far peeling it off before the display spazzed and blacked out. Started over with a replacement. pic.twitter.com/ZhEG2Bqulr

However, it turns out leaving the plastic layer on still causes the Android-powered phones to self-knacker. The Verge’s executive editor Dieter Bohn discovered random bulges forming on the hinge of the phone’s fold that distorted the screen’s display. Bohn reckoned it was caused by a piece of hard debris trapped under the phone that was pressing into the screen. Over time, Bohn’s unit also gave up and broke.

SUPER YIKES: something happened to my Galaxy Fold screen and caused a bulge. I don’t know how it happened, and I’m waiting to hear back from Samsung. It’s broken. https://t.co/p1014uB01D pic.twitter.com/3FZJkWtSKr

The Galaxy Fold can be ordered right now, and is expected to ship by the end of April in the US, and early May in the UK and Europe.

It’s obviously not the first time Samsung have faced a PR nightmare for its smartphones. Remember when its Galaxy Note 7 devices kept catching fire or exploding? Airlines banned people from bringing the model on their planes, and it was eventually discontinued. Customers were offered a full refund or an exchange for another Samsung mobile.

In reality there’s no way for Samsung to come back from this situation without seriously delaying or canceling the Galaxy Fold entirely. Doesn’t matter how it happened. This is such a significant failure - such a core anxiety that someone would have around the product.

We've asked Samsung's PR team to comment on the kerfuffle. ®

Samsung's PR team told us on Thursday it's seen the complaints, and also scolded the reviewers for removing the seemingly innocuous protective layer from their Fold displays:

A limited number of early Galaxy Fold samples were provided to media for review. We have received a few reports regarding the main display on the samples provided. We will thoroughly inspect these units in person to determine the cause of the matter.

Separately, a few reviewers reported having removed the top layer of the display causing damage to the screen. The main display on the Galaxy Fold features a top protective layer, which is part of the display structure designed to protect the screen from unintended scratches. Removing the protective layer or adding adhesives to the main display may cause damage. We will ensure this information is clearly delivered to our customers.

As at least one of the scribes pointed out, plenty of normal folks are going to accidentally remove this plastic layer, not realizing it's essential for its operation, and wreck their handsets.