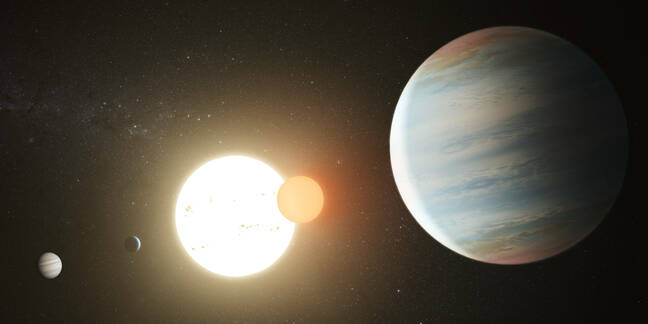 Binary star systems are relatively rare but astroboffins poring through data from the now-defunct Kepler telescope have found something unique - a binary system with three planets.

Kepler-47 is an oddity. At the center of the system lies not one but two stars locked into a tight orbit, making it a circumbinary system. Every 7.45 days, the stars appear to eclipse another. The system also hosts planets too, one of which was missed by NASA's retired Kepler Space Telescope.

The latest exoplanet, nicknamed Kepler-47d, brings the total number of planets around Kepler-47 to three, and confirms its multi-planet status. Although nine circumbinary systems have been found so far, none contain more than one planet. The new planet, Kepler-47d, sits in the habitable zone in between its siblings Kepler-47b and Kepler-47c. It's also the bulkiest object of them all.

Despite its large size - according to the researchers it's about seven times as big and is at least twice the mass of Earth - Kepler-47d's presence was surprisingly tiny in the eyes of the Kepler Space Telescope.

"We saw a hint of a third planet back in 2012, but with only one transit we needed more data to be sure," said Jerome Orosz, lead author of the research published in The Astrophysical Journal and an astronomy professor at San Diego State University, United States.

The Kepler Space Telescope scouts out exoplanets by using the transit method. As planets pass by their parent stars in their orbits, the brightness of the star dips periodically. The team of researchers uncovered signals from one transit but wasn't completely sure that it was from a new planet until now.

"With an additional transit, the planet's orbital period could be determined, and we were then able to uncover more transits that were hidden in the noise in the earlier data," said Orosz.

Kepler-47d takes 87 days to circle around its star and wasn't detected as easily as its neighboring planets since its orbit wasn't aligned with the Kepler Space Telescope's view.

The Kepler-47 system is small; it all fits within the size of Earth's orbit around our Sun. Kepler-47b has an orbit of 49 days and Kepler-47c's is 303 days. Located about 3,340 light-years away in the Cygnus constellation, Kepler-47 is not too far from another peculiar circumbinary system, Kepler-1647 - home to Kepler-1647b, known as the largest Tatooine planet.

"This work builds on one of Kepler's most interesting discoveries: that systems of closely packed, low density planets are extremely common in our galaxy," said Jonathan Fortney, an astronomy and astrophysics professor at the University of California, Santa Cruz astronomer, who was not involved in the study.

Here's another nugget of exoplanet goodness

In other exoplanet-related news, NASA's TESS telescope designed to continue the work of the Kepler spacecraft has discovered its smallest planet yet, just 52 light years away. HD 21749b has been described as a warm sub-Neptune planet and has a size similar to that of Earth.

Although it's rocky and lies in the habitable zone, it's unlikely to harbor life since it lies so close to its sun. It has an orbit of just 7.8 days and its surface reaches scorching temperatures of about 427˚C (~800 degrees Fahrenheit). ®