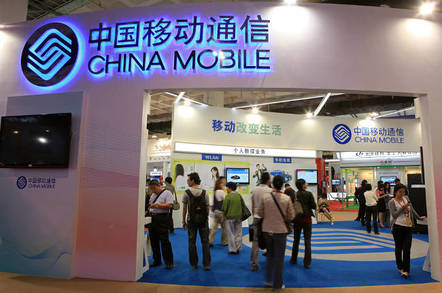 "It is clear that China Mobile's application to provide telecommunications services in our country raises substantial and serious national security and law enforcement risks," FCC chairman Ajit Pai said in a statement today.

The block on China Mobile will be voted on by the FCC's commissioners on May 9, though it is certain to pass given that three of the five bods overseeing the watchdog are Republican and will vote as a united block.

China Mobile has the largest number of mobile phone customers in the world – around 900 million – and first applied for permission to enter the US market in 2011. The company is owned by the Chinese government and has a US subsidiary based in Delaware.

China Mobile wants approval from the FCC to become a "common carrier" in the States, meaning that it will be able to carry international voice traffic between America and other countries as well as connect to the US telecoms network. It told the FCC that it did not intend to offer its own telephone services within the US – only extend its current service for existing customers into the Land of the Free.

But Pai has said no, claiming that approach represents a threat. "Safeguarding our communications networks is critical to our national security," he argued, claiming to have "reviewed the evidence in this proceeding, including the input provided by other federal agencies."

In truth, the decision to hold a vote in order to deny the longstanding application is more political theater, and another shot in what has become a campaign by the Trump Administration against Chinese telecoms companies. In the background to all this, Chinese spies are, according to the FBI at least, rifling through American corporations for trade secrets.

In recent months, the US government has insisted that Chinese communications products – particularly next-generation 5G kit – represent a serious security risk, and has effectively banned them from federal networks within the United States. Huawei has sued in response.

The White House is still considering whether to extend that ban to private companies (i.e. everyone outside the federal government) by declaring a national emergency. And the FCC is still considering a similar ban that would require mobile companies to pull out Chinese-manufactured equipment from their networks. So far, the unwillingness of US networks to go ahead with the security risk argument in the face of the enormous cost of getting rid of Chinese-made equipment has stopped both proposals from moving ahead.

In the meantime, Uncle Sam has exerted significant pressure on European partners to ban products from Huawei, among others, and threatened to withhold intelligence from its allies under the argument that it would be insecure over networks that contain Chinese-manufactured equipment.

European countries, including Germany, the UK and the Netherlands, have felt obliged to run in-depth security assessments on Chinese equipment amid this pressure, and despite British intelligence agents noting some concerns with Huawei's security practices, Europe has made it plain that it will not institute a ban against such equipment.

Critics question if there is an actual security risk from Chinese products or whether the Trump Administration is simply engaging in protectionist policies because Chinese companies are perhaps ahead of their American counterparts when it comes to 5G carrier equipment, and are able to produce their gear at a lower cost.

There is little doubt that whichever companies are able to form the foundation for next-generation 5G networks will have an oversized impact on its future development. US manufacturers in particular are aware of this since they are the ones they have benefited from that exact position in the current mobile networks.

The decision to ban China Mobile eight years after its application has come from the White House. In his statement, Pai notes: "On July 2, 2018, after a lengthy review of the application and consultation with the US intelligence community, the Executive Branch agencies recommended that the Commission deny China Mobile’s application due to substantial national security and law enforcement risks that cannot be resolved through a voluntary mitigation agreement."

According to Pai, the order that will be voted on next month will also "find that China Mobile is vulnerable to exploitation, influence, and control by the Chinese government." ®