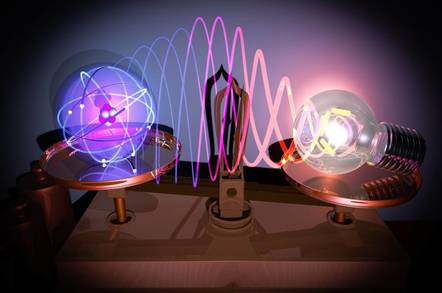 Researchers at the Ruhr-Universität Bochum in Germany have said they have developed a novel method of encoding information with lasers that could boost the amount of bandwidth sent down a strand of fibre to 240 gigabits per second.

In contrast, conventional optical communications currently max out at around 40 to 50Gbps.

A report out earlier this month IEEE Spectrum details the application of spintronics – the study of the intrinsic spin of electrons, in addition to their charge – to optical communications. Research in this field has led to the development of "ultrafast spin-lasers" that exploit carrier spin and circular light polarisation, rather than just the frequency of light.

A paper describing the technology was published in Nature earlier this month, with an older draft available through arXiv.

"Our results overcome the key speed limitations of conventional directly modulated lasers and offer a prospect for the next generation of low-energy ultrafast optical communication," states the abstract.

The spin-laser technology builds on the relative success of silicon photonics, itself a fairly recent research field that enabled engineers to create hybrid semiconductor lasers in which the optical and electronic components are integrated in a single microchip.

The paper claims to demonstrate that spin-lasers can enable room-temperature modulation frequencies above 200GHz, "exceeding by nearly an order of magnitude the best conventional semiconductor lasers".

The research team has built a proof-of-concept system in the lab but admitted that there's a long way to go until this tech can be commercialised. It added that the technology is likely to be more useful in data centre interconnect, rather than long-distance communications.

"Right now, this is a concept," Nils Gerhardt, chair of photonics and terahertz technology at Ruhr-Universität Bochum, told IEEE Spectrum. "We still have a lot of research before we can make a device that you can buy off the shelf. Many challenges to go."

Spin-lasers are not the only application for spintronics in the data centre: for example, Professor Stuart Parkin, director of the Max Planck Institute of Microstructure Physics, and the man responsible for spin-valve technology which led to a thousand-fold increase in HDD capacity, is currently working on Racetrack Memory – a new type of non-volatile memory that writes magnetic information onto nanoscale wires, relying on "spin polarised" electric current.

Last year, Parkin said the tech was just five years away from becoming a product. ®

It's not just politicians and PRs who are powered by spin

'New physics' of electrons that only move in one direction

Duke of Edinburgh gives spintronics researchers a pile of cash