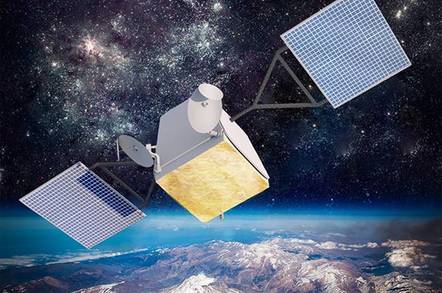 Roundup While Falcon Heavy had space fans jumping for joy and a crashing Israeli lander had them sniffling into their Beresheet-branded hankies, last week in space was a busy one.

SpaceX to DART to a nearby-ish asteroid

Flush with success after getting the second Falcon Heavy off the launch pad without anything exploding, and landing all three boosters to boot, there was more good news for Ol' Musky in the form of the selection of SpaceX by NASA to launch the Double Asteroid Redirection Test (DART) mission in 2021.

DART is costing the agency $69m, including launching the thing and running the mission. It will ride a Falcon 9 from Space Launch Complex 4E at California's Vandenberg Air Force Base. Targeted for liftoff in June 2021, it will use solar electric propulsion to intercept the moonlet of the asteroid Didymos in October 2022.

The mission will see the spacecraft crash itself into the 150 metre moonlet at 6km/s, enough to change the speed of orbit by a small fraction of one per cent, which will be detectable from the ground.

Stratolaunch gets off the ground

The massive Stratolaunch aircraft finally got off the ground over the weekend, after a succession of taxi tests at the Mojave Space Port. The dual-fuselage machine features a wingspan greater than the length of an American Football field.

Founded by the late Microsoftie Paul Allen, Stratolaunch plans to air-launch spacecraft slung from its imposing bulk. The gang expect to drop their first Pegasus (carrying up to 370kg) in 2020 before moving on to what it describes as a "medium launch vehicle" capable of sending 3,400kg to orbit. Longer term goals include a rocket capable of depositing 6,000kg into orbit and a space plane.

The Stratolaunch aircraft itself, based on Boeing 747 avionics and using landing gear from the jet, boasts six engines and can support multiple vehicles weighing in at a combined 226,796kg and can provide access to any inclination.

For this first test, the aircraft flew for 2.5 hours at altitudes up to 17,000 feet. Once operational, the thing is expected to spend up to 10 hours in the air, and be capable of a cruising altitude of 35,000 feet, above a portion of the weather patterns that bedevil traditional launch operators.

The much delayed CST-100 Starliner capsule, which might ferry lucky astronauts to the International Space Station (ISS) next year, has passed testing that simulated the conditions the Boeing teams reckons the vehicle will experience on launch and during orbit.

This involved testing such as blasting the poor thing with the sound waves of lift off and the extreme temperature swings it will have to endure while in orbit.

John Mulholland, vice president and program manager of Boeing's Commercial Crew Program bragged that the testing was "one of the most challenging campaigns of any spaceflight development program, and we succeeded in under 100 days."

He didn't mention the multi-month slip of Boeing's take on getting 'nauts to the ISS... boldly going where Musk & co have been before.

Testing occurred in Southern California, and the spacecraft was trucked back to Florida ready for its first uncrewed launch later this year. Should that go well, the teams will get cracking on readying the capsule for its first crewed jaunt to orbit.

In space junk news, a fuel leak aboard Boeing-built, Intelsat 29e satellite may well have done for the spacecraft as controllers attempted to regain control of the stricken machine. The satellite was originally launched back in 2016.

Damage late on 7 April caused a fuel leak that disrupted service to customers in the Latin America, Caribbean and North Atlantic regions. While the gang worked to bring the thing back in line, something altogether more dramatic happened that resulted in a loss of communications.

Our network of 300 ground-based telescopes captured imagery of this week's Intelsat 29e anomalyhttps://t.co/Jc0RgltiUR

The tracking boffins at ExoAnalytic have emitted imagery and video showing that things don't look good for the stricken bird.

There is no word from the company on what the "damage" was. The altitude of the 29e makes it unlikely to be debris from the recent Indian Anti-Satellite test. Another possibility is a manufacturing defect. Boeing and Intelsat have thus far remained tightlipped as teams work to regain communication with the spacecraft.

If 29e cannot be brought under control it will have to be added to the catalogue of debris to be watched out for, no matter what took out the machine.

On the theme of cluttering up orbits with satellites, Elon Musk reacted to news that Amazon's Jeff Bezos has ambitions to send up thousands of broadband-flinging spacecraft into space with a simple tweet. "Copy cat."

Musk's SpaceX, of course, already has similar plans of its own in the form of the Starlink constellation. The company has sent up some prototype satellites to prove the concept ahead of multiple launches over the coming years that will leave nearly 12,000 satellites unleashing the Internet on regions currently free of connectivity.

Musk's emission caused an eyebrow to be raised by Oneweb's Greg Wyler who reacted first with a "Really?" before following up with documents purporting to show that, well, the Musky kettle may have been calling the Bezos pot black.

Are you suggesting the global satellite design was yours? This 2014 document might jog your memory? pic.twitter.com/CQMgAarni6

Musk and Wyler have a bit of history on the matter. Back in 2014 Wyler, then a part of WorldVu – an outfit with ambitions to launch a constellation of satellites to, er, provide broadband – was in discussions with SpaceX to make the project a reality. The talks ended without agreement, and WorldVu was later renamed OneWeb.

OneWeb has, of course, already launched the first six of its planned 648 satellites. The company secured another $1.25bn in funding last month following its successful launch on 27 February this year. ®