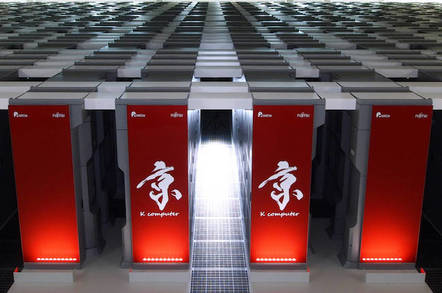 Folk wanting in on the Arm-based goodness baked into Japan's upcoming "Post-K" exascale supercomputer are in luck – Fujitsu has finished the design and sales of commercial versions will begin some time between October 2019 and March 2020.

The $910m Post-K will become the country's most powerful machine once it is switched on some time during 2021 to 2022 and is expected to contest the global top three, along with the first exascale supercomputers from the US, China and Europe.

These systems will be capable of at least one exaFLOPS (a billion billion calculations a second) of compute performance, or 1,000 petaFLOPS. In comparison, IBM's Summit, the most powerful computer in operation today, only manages around 200 petaFLOPS of peak performance.

The Post-K project (since it follows the "K" supercomputer) is a collaboration between Fujitsu and the government-funded Riken research institute. Work on the machine started in 2014.

The system is based on ARMv8-A architecture, and 48-core A64FX processors made by Fujitsu. This approach has demonstrated both benefits and drawbacks: Post-K was originally scheduled to start operation in 2020, but was delayed due to CPU design issues.

The machine will also feature blazing fast HBM2 memory and the Tofu Interconnect, already seen in the K supercomputer.

After years of prototyping, Fujitsu has finally signed its contract with Riken to manufacture, ship and install all the necessary hardware. Since the design has been finalised, the company is free to commercialise the tech and integrate it into its own supercomputer, a successor to the PRIMEHPC FX100 series.

Besides the new flagship, the company is considering a cheaper "entry-level model" – and said this could be built by a third party.

"Arm's successful collaboration with Fujitsu and Riken underscores our commitment to the HPC ecosystem," said Brent Gorda, senior director of HPC at Arm. "Reaching the production milestone marks a significant achievement for Post-K and we are excited to see the potential for broader deployment of Arm-based Fujitsu technologies in support of HPC and AI applications." ®