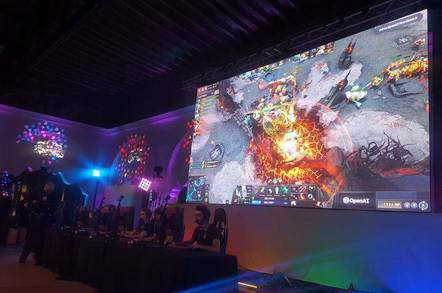 The non-profit recently turned for-profit research hub has been honing OpenAI Five’s skills for Dota 2, an online strategy game, for a while now. In fact, the virtual team have collectively played a whopping 45,000 years of Dota, Greg Brockman, chairman and CTO of OpenAI, said on stage.

Well, all that training seems to have finally paid off. The bots won comfortably, beating the humans in two games out of three. In the first game, OpenAI Five was aggressive from the get-go. It drew the first blood after it stunned and killed an enemy on the spot within the first ten seconds of the match. Within minutes, the bots boasted that had 80 per cent confidence it would win the game.

OG were hot on their heels, however, and the match was pretty even for the first half of the game. Both teams were neck and neck in terms of number of kills and amount of gold mined. OG got a slight lead after 18 minutes with 19 kills to OpenAI Five’s 16. But the glory was short-lived as OpenAI Five swooped in to destroy OG and took its Tier 3 towers. The humans found it difficult to recover, and the bots eventually pulled through to dominate the last half of the match.

After a short break, OG returned for a second bout. At first, it looked like OpenAI Five had cooled down its tactics. But it soon kicked in to gear to pick off its human opponents quickly. The machines racked up a high number of kills and gold, and OG couldn’t put up as good a fight this time round. The gap between both teams continued to widen and the humans quickly succumbed to the pressure.

“I thought we had game one for sure,” said OG team member Johan Sundstein, better known as “N0tail”. “We still thought we could take the fight. We just had to split them up and exploit their flaws.” When he was grilled about the second game, however, he shook his head sheepishly. “The second game was rough,” he admitted.

On the one hand it’s impressive that OpenAI Five bounced back to win against the top professional Dota 2 team out there today. Team OG are the reigning champions of The International, the largest annual Dota 2 tournament. OpenAI Five’s performance was a slump at The International, last year. It lost both of its matches against two different teams and were knocked out early of the competition.

On the other hand, however, the computers play a simpler and more restricted version of the game. For example, both teams can only pick from a pool of 17 heroes rather than the full 115. Powers are also limited so the game is less complex.

OpenAI can also see the whole map, something humans can’t do. The same restrictive settings are pretty much identical to the ones set in the games played at The International, Filip Wolski, a member of technical staff at OpenAI, told The Register.

OpenAI have often been criticised for brute-forcing problems, solving them by simply slamming down more computational power. Before OpenAI Five played at The International last year, it had already guzzled 128,000 CPU and 256 Nvidia GPUs. When The Register asked OpenAI how much hardware the bots consumed this time round, a spokesperson told us it was planning to release the statistics at later date and would prefer to describe the hardware in vague and disappointing units of “GPU hours”, rather than a concrete number.

OpenAI Five are made up of five long-short term memory networks that process the information in a game in terms of a series of numbers. These figures describe things like a hero’s health, inventory, or position in the game. It’s trained using self-play, a popular technique in reinforcement learning that pits the computers against themselves.

The games against OG are the last ones that OpenAI Five will play competitively. But although its short-lived gaming career is over, OpenAI researchers will continue to fiddle with the code to see if the algorithms can be applicable across other domains.

Oh, also OpenAI are letting Dota 2 fans play with OpenAI Five collaboratively for a limited amount of time. So you won’t be playing against the machine but with it as teammates. It’s only open to people that attended the live matches in person for now. These lucky few were given a registration code at the back of their passes. ®