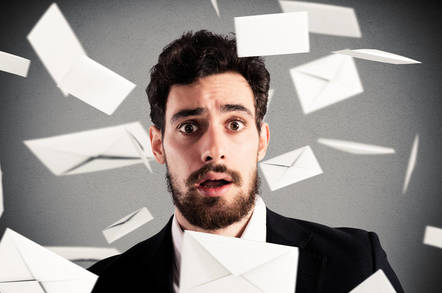 Email a thing of the past thanks to TalkTalk innovation

TalkTalk's email service clearly had a big night out on Thursday and has spent Friday morning lying down in a darkened room.

While no longer the most complained-about broadband provider, the company demonstrated that it still had what it takes by borking email for customers unable or unwilling to use an email service not bound to an ISP.

The first rumblings of trouble for UK users began at around 9:30am as customers received login errors on their email clients.

@TalkTalk My email credentials suddenly don't work for no apparent reason. Can you help please? pic.twitter.com/DRXLRuawos

Some speculated that perhaps passwords had been mysteriously changed, but a simpler explanation would be that the company's email services enjoy the odd wobble every now and again, something that is becoming a depressingly regular occurrence.

Frustrated customers asking if they would be compensated for the outage were met with a terse "we don't charge for our email services" – which will come as a surprise to users who pony up cash on a monthly basis for their connections.

Hi there, we don't charge for our email services. Em

Email, it seems, is not part of the paid-for package, so be grateful it works at all.

We talkedtalked to TalkTalk, and received a statement from its overworked statement machine:

We're aware that some TalkTalk webmail customers are currently having issues accessing their emails. We are investigating and aim to resolve as soon as possible.

On the plus side, a quick glance at the webmail login screen assures users that "the new TalkTalk Mail is almost here" before extolling the virtues of the company's upgrade plans.

These are plans, it appears, that do not involve allowing customers to actually connect to the service. ®