Authority barged in after disposal caught on camera, ordered chap to pay costs of almost £3k 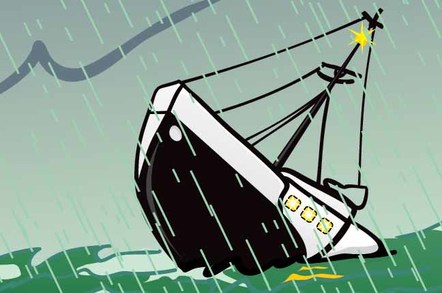 Boatnotes Justice has finally been served for abandoned boats everywhere as a Kentish man was found guilty of callously ditching his vessel in a residential area.

The 55-year-old Margate resident was caught on camera fly-tipping a rowing boat and various bags of what El Reg presumes to be ballast, but admits might just be old building supplies.

The neighbour that had stuck their oar in handed the video to Thanet District Council, which launched an investigation and refused to give up the hunt until they found the chap, who lived just across the road from the dumping ground.

He was arrested by Kent Police on Monday 1 April because he had previously attempted to jump ship, and failed to appear at a scheduled magistrates' court hearing over the argy-bargy.

Having been branded a very naughty-cal boy, he was ordered to do 200 hours unpaid work in the community. He had already served one-and-a-half days in prison for skipping bail.

He also had to pay a total of £2,780.36, which includes the cost of someone making the area ship-shape again, and a hull of a lot of legal fees.

The council didn't say what would happen to the noble vessel, a wooden boat painted blue and green which looks to be in surprisingly good nick given its latest mooring.

Fly-tipped boats are an under-reported scourge of the UK that El Reg has sought tirelessly to bring to the public's attention.

Due to a spate of speedboat-related incidents, it was initially thought to be related to Bullseye winners growing tired of their prizes.

However, the situation escalated last year as a fishing boat was torched in the Northeast.

It is hoped that the latest charge will act as a deterrent and bring these incidents to an end – the schooner, the better. ®

Geek's Guide Give a Cheshire cheers to a true waterway wonder

The 'last thing you want' when selling up, sighs neighbour

Microsoft's Azure Portal: A boat load of updates, but is it too ambitious?

The spiritual successor to the Windows GUI