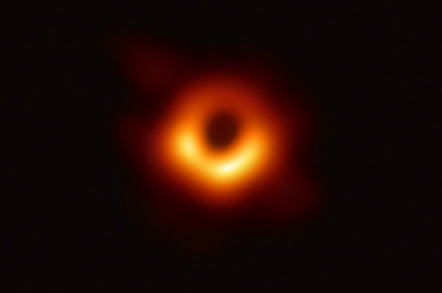 In response to the scientific community's celebration of the publication on Wednesday of the first picture of a black hole, internet trolls painted an even darker portrait of misogyny through an effort to discredit the female postdoctoral researcher, Katie Bouman, who led the development of the imaging algorithm.

Bouman, a postdoctoral fellow with the Event Horizon Telescope and an assistant professor in the computing and mathematical sciences department at Caltech, was one of more than 200 scientists who participated in the project, overseen by Shep Doeleman, an astronomer at the Harvard-Smithsonian Center for Astrophysics.

A photo she posted to Facebook – of herself smiling expectantly as her laptop first rendered the image – was published on the New York Times website and shared on social media, which helped make her the face of the group effort, despite her own effort to share credit with her many colleagues.

Congratulations to Katie Bouman to whom we owe the first photograph of a black hole ever. Not seeing her name circulate nearly enough in the press.

Amazing work. And here’s to more women in science (getting their credit and being remembered in history) 💥🔥☄️ pic.twitter.com/wcPhB6E5qK

Members of Reddit and other social media forums responded by trying to tear her down, seemingly for being a woman, by subjecting her to way more academic scrutiny than her male peers would expect. They searched and searched for a smoking gun, or any evidence of injustice, to discredit her, and found none.

For instance, an individual posting to Reddit argued that Andrew Chael, a doctoral candidate in physics at Harvard who also worked on the Event Horizon Telescope team, deserved the credit because he had contributed more lines of code to the GitHub repository for ethim, a Python application used to process the black hole image.

Visual versions of that argument – memes – began circulating on social media, suggesting that Chael's contribution had been overlooked because he wrote "850,000 of the 900,000" lines of the ethim code.

Despite the vacuousness of using Git contributions as a proxy for responsibility – a misconception justly ridiculed – the social media ruckus reached the point that Chael on Thursday felt he needed to address "awful and sexist attacks on my colleague and friend Katie Bouman."

In a series of Twitter posts, he said three separate software libraries were involved in the creation of the black hole image and that while he wrote much of the code for one of those image pipelines, it would not have worked without Katie's contributions and input from others.

Chael congratulated Katie for the recognition she's received and expressed satisfaction that she's inspiring people as an example of women working in STEM disciplines. He also expressed appreciation for her efforts to credit her colleagues, many of whom are women.

"Together, we all make each other's work better; the number of commits doesn't tell the full story of who was indispensable," said Chael, noting that he didn't write 850,000 lines of code and that the software he worked on has only about 68,000 lines.

"So while I appreciate the congratulations on a result that I worked hard on for years, if you are congratulating me because you have a sexist vendetta against Katie, please go away and reconsider your priorities in life," he said. "Otherwise, stick around – I hope to start tweeting more about black holes and other subjects I am passionate about – including space, being a gay astronomer, Ursula K. Le Guin, architecture, and musicals." ®