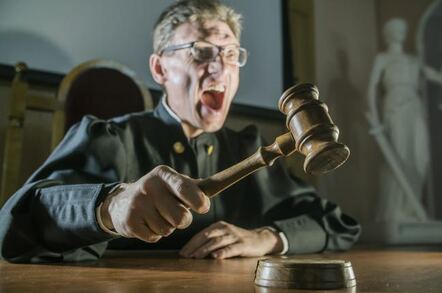 Not Judge Austin, just a guy with a gavel

The judge hearing an age discrimination claim against IBM in Texas on Wednesday issued a withering denial of the company's motion to unmask the source of internal documents at the center of plaintiff Jonathan Langley's case.

Langley, who served as worldwide program director and sales lead of IBM's Bluemix cloud service, was laid off in March 2017 at age 60 after 24 years with the company. Following a report from ProPublica and Mother Jones that described how IBM targeted older workers for termination, he sued the company in May 2018 alleging age discrimination, as several others have done in other states since then.

Among the evidence in Langley's claim is an internal IBM document that describes a deliberate strategy to hire recent university graduates "to correct seniority mix." The Register obtained a copy of the document when it was briefly available to the public before it was sealed at the request of IBM.

Ostensibly to aid its pre-trial evidence gathering, known as discovery, IBM's legal team in February filed a motion to compel Langley to reveal the source of the document. The company's attorneys also sought to sanction him for failing to cooperate in his initial deposition by requiring Langley personally to pay to fly defense lawyers from New York to Austin, Texas for a second deposition.

Legal experts who spoke with The Register were skeptical that Langley would be able to resist IBM's motion, because while journalists can rely on shield laws to avoid revealing sources, litigants generally have no privilege to withhold information vital to discovery.

In his order on IBM's motion, US Magistrate Judge Andrew Austin agreed with IBM's argument "informant's privilege" can only be asserted by the government. But he said that doesn't even need to be considered since the identity of the leaker is irrelevant to this case.

IBM claims it needs to know the leaker's identity to aid in its defense, but Judge Austin said that's just not true.

"Indeed, there is nothing in Langley’s testimony about the documents or the manner in which he received them that suggests any relevant information would be gained from knowing who the leakers were," Judge Austin wrote.

"Rather, it appears that – understandably – IBM wants to plug its leak, and that is the primary motivation for its demand for this information. But as counsel well knows, wanting to plug a leak is not a legitimate basis to support a motion to compel discovery, much less one coupled with a request for sanctions."

What's more, the judge is incredulous that IBM needs the identity of the leaker to find out about its own documents. In footnote, he observed that if any company is capable of searching documents, it's IBM.

The company, he wrote, "regularly runs commercials touting its 'Watson' AI technology, which also has the ability to process immense amounts of data. Surely, IBM has the ability to locate the originals, drafts, and original authors of the 'leaked' slides and reports – assuming it has not already done so."

The judge then goes on to scold IBM for failing to adequately support Langley's discovery efforts. "As should be obvious by now, IBM’s conduct in discovery to date has been less than exemplary," the judge wrote in his order. "It is on thin ice at this point."

Characterizing the company's motion to compel as "lacking in substance" and "weak on the procedure side," Judge Austin ordered IBM to produce original versions of the documents Langley's attorneys entered into evidence within 20 days.

It gets worse for Big Blue. Judge Austin denied a separate motion by IBM asking the judge to reconsider extending the scope of Langley's discovery requests to its Hybrid Cloud Group, rather than limiting discovery to the company's smaller Cloud Worldwide Sales group.

In that order, he reminded IBM about his warning to cooperate in his other order and noted that "IBM's internal structure is a creation of IBM" and because of this, he "will look with a jaundiced eye at arguments suggesting that discovery must somehow align with – and more importantly, be limited by – that structure."

The case is scheduled to go trial in January next year. ®