Still, at least it didn't smear sh!t all over the floor this time 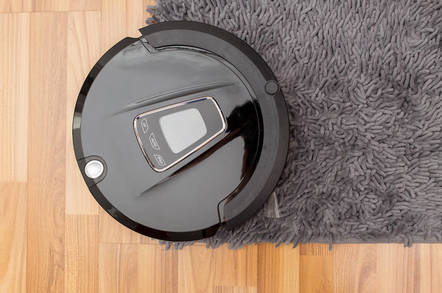 Busting down a stricken woman's bathroom door, guns at the ready, Oregon's finest expected to encounter a dangerous intruder. Instead they found a bungling Roomba Robot Vacuum giving the loo a once-over.

Assuming it did, however, officers reported that at 13:48 local time a woman called 911 saying that she feared a person unknown was in her bathroom.

She claimed the door was locked and that she could see shadows moving through the crack underneath.

If she was frightened, the caller was absolutely right to request police support. After all, there have been instances where homeowners have taken their lives and others' into their own hands and it hasn't gone particularly well.

The operator clearly thought so too and "multiple" deputies were dutifully dispatched. A canine unit was also requested as officers "surrounded" the property.

You can picture it now – rookie cops crawling along the narrow landing, hearts thumping, sweat beading on their brows as they hear "noise coming from the bathroom".

"After several announcements," the post continued, "the suspect does not come out when commanded. With guns drawn, deputies open the door to encounter the suspect."

Yep. It's a bastard robot.

One Deputy Rogers signed off the callout thusly: "As we entered the home we could hear 'rustling' in the bathroom. We made several announcements and the 'rustling' became more frequent. We breached the bathroom door and encountered a very thorough vacuuming job being done by a Roomba Robotic Vacuum cleaner."

Of course we should be glad that no one was ever in any danger, but if Roombas have indeed developed the ability to barricade themselves inside our homes then may the gods have mercy on us all.

Nor is it the first time automated vacuum cleaners have sought to shit up their owners – quite literally in the case of Arkansas's Jesse Newton, who in 2016 delighted denizens of The Social Network™ with a story about how his Roomba ran over puppy poo and spread it all over his home (detailed diagram included). ®