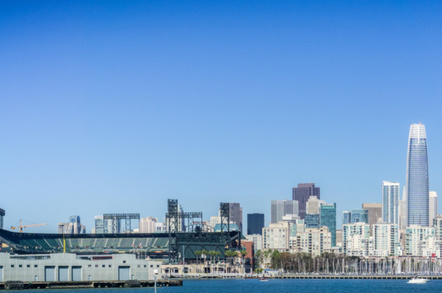 Here they are, in the same photo

Salesforce's towering glass phallus in San Francisco has been omitted from the Oracle Park calendar on sale at the first SF Giants baseball game under the stadium's new Big Red moniker.

Oracle signed a $200m, 20-year deal for the rights to the AT&T Park stadium last year and rather unimaginatively renamed it Oracle Park.

But when attendees at the first game of the season got their hands on this year's calendar, they noticed a gaping hole in the photo of the city's skyline on the front cover.

There is little love lost between Big Red's founder Larry Ellison and, well, any other tech exec – so the internet was soon ablaze with conspiracy theories.

I am LOVING that Oracle photoshopped Salesforce tower out of the picture on this calendar. This is the pettiness I live for! pic.twitter.com/dP92yfhtB9

Even Salesforce CEO Marc Benioff, having been tipped off to the missing skyscraper, got in on the joke: he reportedly said on Twitter that "someone has Tower envy" – although the innuendo has since been deleted.

However, the baseball team offered a rather more prosaic explanation for the missing tower.

"That is an old photo because we have not had an updated aerial photo taken due to production schedules," a spokeswoman told Bloomberg. ®