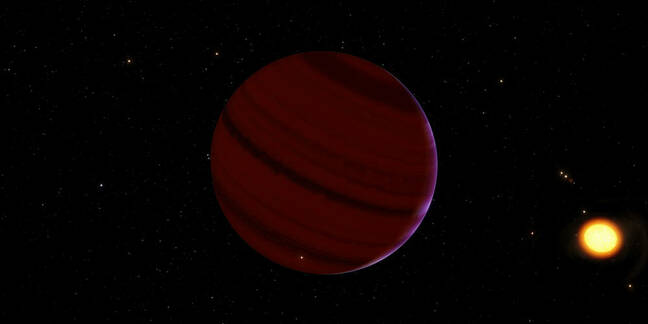 The discovery of two oddball brown dwarfs orbiting a giant orange star has reignited the question of whether brown dwarfs are feeble stars or bloated planets.

What is surprising, however, is the structure of both of the brown dwarfs’ orbits. They are locked around their parent star v Ophiuchi in such a way that their orbital periods are almost in perfect ratios of one another. The lighter brown dwarf closer to the star completes an orbit in 530 days, whilst the heavier one further away finishes a lap in 3185 days. It means that as soon as the outer object finishes one orbit, the inner one has already gone past its star six times.

A team of researchers led by the Centre for Astronomy of Heidelberg University describe this as a 6:1 resonant orbital configuration. It raises the question of whether brown dwarfs are created from the gravitational collapse of interstellar clouds like typical stars, or if they’re formed in protoplanetary disks around other stars like planets.

“The 6:1 resonance is a strong indication for the latter scenario,” said Andreas Quirrenbach, first author of the paper published in Astronomy & Astrophysics and a research scientist at the University of Heidelberg. “Only then could the orbits of the newly developing brown dwarfs adjust to a stable resonance over millions of years.”

There are an estimated 100 billion brown dwarfs sprinkled across the Milky Way. They lack enough mass to burn hydrogen in their cores, and, instead, have lukewarm surfaces and emit a lackluster light.

“Brown dwarfs are neither stars nor planets,“ said Eileen Gonzales, a graduate student studying low mass stars at the City University of New York, who was not involved in the study, told The Register. “They are their own category of objects that have masses that lie in between those of stars, which are more massive, and planets, which are less massive.”

Although it’s the first time that astronomers have found evidence that brown dwarfs might have formed from protoplanetary disks, it doesn’t provide conclusive evidence that they’re stars, Gonzales said.