Three-year-old will have own kid disable it in 2067 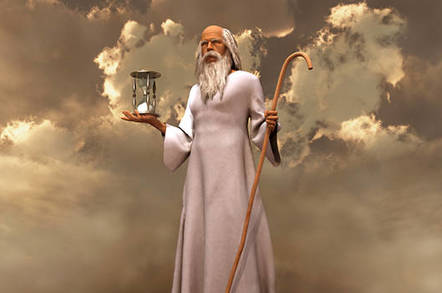 It's something many of us have had to deal with: you type in the wrong code into your iPhone or iPad and it get disabled for some period of time.

It is a welcome security feature: it makes it difficult for someone who doesn't have the code to get into your device and makes "brute force" attacks – where someone keeps tapping in different codes (physically or through software) in an effort to break into your device – nearly impossible to pull off.

But as anyone who has a small child will tell you, it can sometimes work against you, especially if you have a small human who is capable of understanding that the iPad and all the wonderful shiny delights contained within can be accessed by tapping on the numbers, but isn't up to speed on remembering specific sequences of numbers. In other words, three and four year olds.

One father found out another interesting aspect of this security feature however when he left his iPad within reach of his kid: there is seemingly no top limit to how long the disable feature will remain in place.

Evan Osnos is a writer at The New Yorker and was very surprised to find on picking up his Apple device that he was going to have to wait a hefty 25,536,442 minutes until he could punch in the right code and gain access.

For those of you already working on the maths, that's an impressive 48 years. Old enough that his three-year-old will have its own three-year-old by the time it unlocks.

If you can't quite believe that, he didn't either, tweeting: " Uh, this looks fake but, alas, it’s our iPad today after 3-year-old tried (repeatedly) to unlock. Ideas?" Along with a picture of the eternally damned bit of kit.

And this being Twitter, everyone rallied around and helped... Well, sort of. Initially, everyone informed Evan that all was lost and he might as well throw the $400 rectangular chunk of electronics away.

He appeared to be contemplating it too – better to chunk your iPad in the bin than have to go to an Apple Store and put up with a "genius" smugly telling you what you should have done, before telling you it will take a week to fix it, and it will cost more than the iPad itself.

But that was Bad Twitter. Good Twitter is always there - albeit a day after the ignorant unpleasant types have wandered off to be ignorant and unpleasant elsewhere. And Good Twitter had the solution. Plus, rather helpfully, it provided links to articles that covered this specific problem. Clearly Evan is not the only parent to be hit with mass-input-delay disorder.

Two days later and he is back with more news: "Update on toddler-iPad-lock-out: Got it into DFU mode (don’t hold down the sleep/power button too long or you end up in recovery). Now restoring. Thanks to those who shared advice!"

There's no word yet on whether the restore worked. But fingers crossed. And in case you want to know what DFU mode is – no, it doesn't stand for "done fucked up" although it should – it's an acronym for "Device Firmware Update" and let's you tinker with iOS. A sort of Recovery Mode++.

There are other ways to get around the passcode but they typically require you to have done lots of very Appley things – connect iPads to Macs with authorized Apple USB cords while sitting under a picture of Steve Jobs. With luck, DFU will work and our Evan will get his device back.

You do have to wonder though: why on earth doesn't Apple have a maximum disable time on its devices? And just how many times did that three-year-old have to get the code wrong to reach 48 years of delay?

But we all have something to learn from this. So tonight, hug your loved ones tight – and by loved ones, we mean your iPhone and iPad – because you never know what could happen and tomorrow they may be taken away from you. Oh, and never let a three-year-old near a locked tablet. ®

What is this, 2016? A rummage around in 7th-gen iPad innards shows repurposed tech within

Bigger case means we can use even more glue!