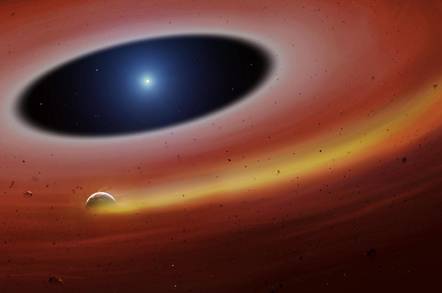 Astronomers have discovered an object that orbits dangerously close to its parent white dwarf star. It should have been crushed to death by the dying star’s gravitational pull, but has miraculously stayed intact somehow.

“The planetesimal we have discovered is deep into the gravitational well of the white dwarf, much closer to it than we would expect to find anything still alive,” said Boris Gaensicke, co-author of the research published in Science and a physics professor at the University of Warwick.

The white dwarf has a catchy codename of SDSS J122859.93+104032.9 and is located 410 light years away, somewhere in the Virgo constellation. Scientists were surprised to find an object that survived the destruction that the perishing star inflicted on its neighboring planets. Originally a main sequence star with twice as much mass as the Sun, the star swelled to become a red giant after all the hydrogen fuel in its core burnt out.

Next, the red giant violently shed its outer layers, ejecting a shell of ionized gas that engulfed its nearest planets. One object has managed to cling on for dear life, however. The planetesimal is estimated to be at least a kilometer wide and as big as an asteroid in our Solar System and has a short orbital period of about two hours, meaning it lies deathly close to its parent star.

“The white dwarf's gravity is so strong – about 100,000 times that of the Earth's – that a typical asteroid will be ripped apart by gravitational forces if it passes too close to the white dwarf," said Christopher Manser, first author of the paper and a research fellow at the University of Warwick.

In order to survive the star’s gravitational field, the researchers believe the object has to be a very dense. “If it was pure iron it could survive where it lives now, but equally it could be a body that is rich in iron but with internal strength to hold it together, which is consistent with the planetesimal being a fairly massive fragment of a planet core,” said Gaensicke.

“If correct, the original body was at least hundreds of kilometers in diameter because it is only at that point planets begin to differentiate – like oil on water – and have heavier elements sink to form a metallic core.”

The large team of researchers discovered the leftover core when they studied the debris created from the demolition of the star’s inner planets. Data gathered from the Gran Telescopio Canarias telescope in Spain revealed an odd ring of gas following a solid object in the leftover mess.

It’s a rare find, and is only the second time that astronomers have spotted a planetary fragment that has endured the death of a star. The first one was also found around white dwarf star WD 1145+017, also in the Virgo constellation, 570 light years away.

The discovery gives researchers a sense of our own Solar System’s grisly future. "The general consensus is that 5-6 billion years from now, our Solar System will be a white dwarf in place of the Sun, orbited by Mars, Jupiter, Saturn, the outer planets, as well as asteroids and comets.

“Gravitational interactions are likely to happen in such remnants of planetary systems, meaning the bigger planets can easily nudge the smaller bodies onto an orbit that takes them close to the white dwarf, where they get shredded by its enormous gravity,” said Manser.

Learning about the masses of asteroids, or planetary fragments that can reach a white dwarf can tell us something about the planets that we know must be further out in this system, but we currently have no way to detect. The researchers have a list of other systems with similar debris disks lined up to look for other zombie-like planetesimals.

“We are confident that we will discover additional planetesimals orbiting white dwarfs, which will then allow us to learn more about their general properties," Manser added. ®