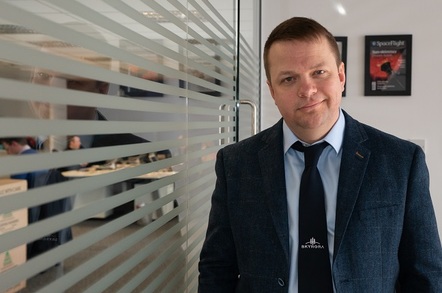 Got a spaceport? Volodymyr Levykin, CEO of Skyrora, wants to hear from you (pic: Skyrora)

Edinburgh-based Skyrora, flushed with success after getting its Skylark Nano rocket off the ground in 2018, is on the hunt for a location for its next three engine tests.

As well as international operators, the upstart outfit has also invited all the potential UK spaceport locations to submit proposals to be the first to send a privately built and operated UK rocket into space from the sacred soil of Blighty.

Hopefuls have until 26 April to make their submissions.

The first firing of a missile into space from Scotland actually occurred back in 2015, but was an American Terrier-Orion two-stage rocket, launched from the Hebrides missile range as a defence demonstration.

Skyrora's wares, on the other hand, are built and assembled in the UK. Two of the rockets have already been put together.

The first rocket, the two stage Skylark Micro II, is due for launch in April. It will only go as high as 35km and will ride commercially available solid rocket boosters as a test of avionics and telemetry. The actual going into space thing will occur in the second half 2019 as the company sends up two more rockets on sub-orbital lobs

The two boosters capable of reaching the Kármán line are the SkyHy and SK-1. The SkyHy, standing at over six metres, is a two stage, hybrid powered rocket expected to get somewhere between 75 and 100km. The single stage 10 metre tall SK-1 should go beyond 100km and carry a 100 kg payload.

The company hopes that a successful SK-1 launch could be a precursor to an orbital mission, since the rocket will feature the same control systems.

As for which launch location stands the best chance of being selected, the company lists a number of factors, including readiness, tracking systems and proximity to a Skyrora facility. The company currently has a prototype engine set for testing at Cornwall Airport near Newquay.

Skyrora's efforts are to be commended, since the UK continues to hold the title of the only country to have developed and then discarded a satellite launch capability.

The Edinburgh-based Hydrogen Peroxide fanciers shipped a relic from the UK's earlier all-too-brief foray into orbit in the form of the remains of a flown Black Arrow earlier this year. ®