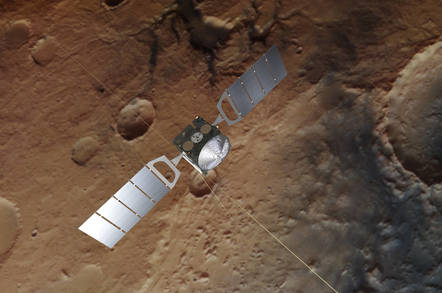 Signs of the hydrocarbon molecule rouses excitement because there is a possibility that it may be produced by biological processes, and therefore, some sort of alien life is out there. On Earth, the gas is created as a byproduct of anaerobic respiration by a group of ancient simple unicellular microbes, but it can also be created by geological processes too.

There was excitement at NASA in 2013 when Curiosity detected four huge spikes of methane. ESA scientists have since revisited readings collected by Mars Express from 2012 to 2013, a time when NASA’s Curiosity rover began exploring the Martian surface.

We're told this week that the Euro eggheads discovered that their spacecraft did indeed detect methane a day after the American rover did in June 2013. At that point, Curiosity was wheeling around the Gale crater, and Mars Express flew over the same spot, too. The two consecutive readings originating from the same region has sent tongues wagging among the lab-coat-clad community.

“In general we did not detect any methane, aside from one definite detection of about 15 parts per billion by volume of methane in the atmosphere, which turned out to be a day after Curiosity reported a spike of about six parts per billion,” said Marco Giuranna, lead author of the results published in Nature Geoscience, and a researcher from the National Institute for Astrophysics and Planetology, Italy.

“Although parts per billion in general means a relatively small amount, it is quite remarkable for Mars – our measurement corresponds to an average of about 46 tonnes of methane that was present in the area of 49 000 square kilometres observed from our orbit,” he added.

The Martian atmosphere is a harsh environment to survive in. It’s constantly battered by solar rays so methane molecules won’t last long as they get ripped apart when they collide with the high energy photons and electrons emitted by the Sun. The measurements made by the spacecraft means that the gas was recently ejected even if it might have been produced millions of years ago.

Although it’s the first time that two independent measurements made by a spacecraft and a rover seem to agree with one another, the results don’t provide many hints on how the methane was produced.

So, the researchers turned to simulations instead. Now it looks like the amount of methane detected seems to show that the source of the gas isn’t hidden around the Gale crater.

“Our new Mars Express data, taken one day after Curiosity’s recording, change the interpretation of where the methane originated from, especially when considering global atmospheric circulation patterns together with the local geology,” said Giuranna “Based on geological evidence and the amount of methane that we measured, we think that the source is unlikely to be located within the crater.”

Computer simulations that map how likely certain regions on the Martian surface emit methane were created. They were based on measured data, atmospheric processes and the effect of methane seeping out from rocks.

They showed that it was possible the trapped methane could be leaking out through meteor impacts striking the Martian surface and freeing gas. Other processes, like cracks in permafrost, could also release methane into the air.

“Our results support the idea that methane release on Mars might be characterised by small, transient geological events rather than a constantly replenishing global presence, but we also need to understand better how methane is removed from the atmosphere, and how to reconcile the Mars Express data with results from other missions,” said Frank Daerden, co-author of the paper and a researcher from the Royal Belgian Institute for Space Aeronomy.