What do you think I am? A chartered accountant? 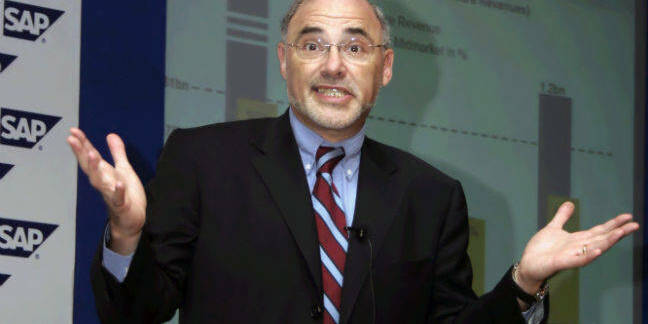 Don't ask me, I just sign the cheques ... Léo Apotheker

Autonomy Trial Ex-HP CEO Léo Apotheker had not read any of KPMG's due-diligence reports on Autonomy ahead of his company's $11bn acquisition of the British software maker, he told London’s High Court on Tuesday.

Under cross-examination from barrister Robert Miles QC, acting for former Autonomy CEO Mike Lynch, Apotheker painted a grim picture of the top of HP in the immediate run-up to the US titan's acquisition of Autonomy in 2011.

I just got here. What's it all about?

In mid-2011, HP spent $11bn buying Autonomy, a maker of software to keep track of unstructured data, founded by Mike Lynch in the UK. After the buyout, the US IT titan wrote down the value of Autonomy by $8.8bn, claiming the Brit biz had "misrepresented" its value. Lynch, Autonomy CEO at the time of the biz gobble, denies this.

The working relationship between Apotheker and then-HP CFO Cathie Lesjak was described, by Apotheker, as “poisonous” in the days before the takeover. Lesjak even pleaded with HP chairman Ray Lane to stop Apotheker going ahead with the deal, the court heard, sending the chairman emails describing what PR people inside HP were saying about it.

"I tried to talk to him [Apotheker] last week on this and he wasn’t interested. We are reactive and act without good planning. There isn’t financial discipline," Lesjak told Lane, referring to a pre-buyout conversation with Leo Apotheker.

The court was shown an email from Apotheker to Lane asking the chairman to exclude Lesjak from a board meeting held the day before the Autonomy takeover, to which Lane briefly replied: “Probably unprecedented. I would think better to have them in the room.”

Startled by his two top executives squabbling over the Autonomy acquisiton, a large deal even by HP’s standards, Lane called a meeting of non-executive directors, specifically excluding “management” and “consultants," the court heard. In the courtroom, Miles then put it to Apotheker that after the non-execs’ meeting, Lane spoke the then-CEO of HP about what they had discussed – and Apotheker denied having any memory of the conversation.

“Do you think [Lane] is the sort of person who’d make this sort of thing up?” asked Miles. Apotheker, once CEO of SAP, kept his half-smiling poker face on, Monday's sky-blue tie replaced by a sombre dark one, and deflected: “No. I’m saying we have different recollections of the conversation.”

Apotheker told the High Court he had not seen a final due-diligence report from HP advisers KPMG before committing to the acquisition – and that he acted partly on the advice of Peter Weinberg from corporate advisory firm Perella Weinberg when deciding to approve the $11.7bn sum HP shelled out for Autonomy.

“Did you ever read any report by KPMG on the due diligence?” Miles asked Apotheker, to which the former CEO replied: “No, I didn’t.” The court heard the auditors produced a draft report by August 9, 2011, about a week before the acquisition was announced – and Apotheker didn’t even read that. A final report never showed up from KPMG, the court heard, not that Apotheker ever realized the auditors had not produced a finalized dossier.

The system we had in place relied on very professional people, accountants, chartered accountants in fact, to make sure things were in order. It wasn’t up to me to read them – by the way, I would have been incapable of reading all the material. I relied on the system in place, the traffic light system, if someone thought there was something...

Frowning, Miles interrupted: “You say you were incapable of reading [it]?”

“The report was pretty clear,” said Apotheker, adding that “nothing came up, and there was no need to read the report.” Under further needling from Miles, Apotheker then said he didn’t read the report “because I'm not a chartered accountant,” and “I would not have been able to add any value.”

“Did anyone tell you KPMG had never finalised their report?” asked Miles, to which Apotheker, hunched over in the witness box, answered: “No, nobody did.” He did, however, tell the court that, as far as HP was concerned, due diligence was considered done by August 16, 2011, two days before the acquisition was announced, shrugging: “No material was found.”

On Monday, the ex-CEO admitted in court that he hadn’t read Autonomy’s most recent quarterly financials before the deal, either.

Another thrust of Miles’ questioning was whether Apotheker was bent on completing the Autonomy buyout by August 18, 2011:

Miles: Were you aware the due diligence was intended to be completed by the 18th? Did you know at that time that the plan was the whole of the due diligence process would be carried out to enable an announcement to be made on 18th August?

Apotheker: That was to do proper due diligence and, if possible, do it by the 18th. I didn’t instruct the team to proceed this way.

Miles: Did it surprise you to know this was the plan?

Apotheker: No, I'm trying to give you a factual answer, which I just did.

Miles: You left the due diligence process itself to others, didn’t you?

An email from Andrew Kanter, of Autonomy, to chief exec Mike Lynch, dated August 9, 2011, was shown to the court to reveal just how much due diligence HP had managed to complete nine days before the takeover was announced:

28 group calls covering at least as many hours. There are a few more calls tomorrow but that should be about it. Documents provided total over 750 and documents alone (no video demos) are over 1GB. We’ve got a few more to provide today.

The next few months of the Autonomy trial consist of witnesses giving evidence to the court, verbal and written. The Register will continue reporting, just as the trial continues. ®