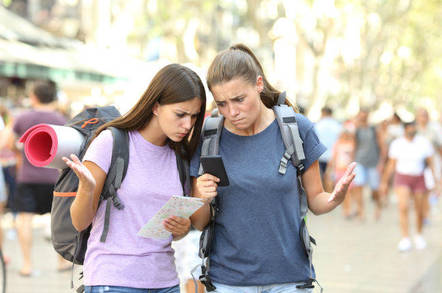 In a report [PDF] issued last week, the Center for Advanced Defense (C4ADS), a data analyzing non-profit, documents a series of attacks, attributed to Russia, designed to block or interfere with signals from the Global Navigation Satellite Systems (GNSS).

The report, titled "Above Us Only Stars," argues that GNSS interference represents a viable, emerging strategic threat.

"Using publicly available data and commercial technologies, we detect and analyze patterns of GNSS spoofing in the Russian Federation, Crimea, and Syria that demonstrate the Russian Federation is growing a comparative advantage in the targeted use and development of GNSS spoofing capabilities to achieve tactical and strategic objectives at home and abroad," the report says.

Such concerns took more concrete form last November, when the Norwegian Defense Ministry reported that Russian forces in the Arctic had interfered with GPS signals during a NATO drill the month prior in Norway. Both Norway and Finland have protested the meddling. The US Department of Transportation last year issued a warning about GPS disruption in the Eastern Mediterranean.

Russia is far from the only nation exploring GNSS jamming and manipulation. In 2016, South Korea reported that North Korea has interfered frequently with its satellite navigation system. The US military has also conducted training exercises involving GPS jamming.

Not new, but much more disruptive now

The potential impact of GPS spoofing was demonstrated in 2013 by University of Texas researchers who used about $2,000 in hardware to steer an $80 million yacht off course via signal manipulation.

Concern about threats to US satellite navigation systems goes back further still, but lawmakers have been slow to address the issue. In a March 2017 house hearing, "Threats to Space Assets and Implications for Homeland Security," retired Gen. William Shelton, the former head of Air Force Space Command, warned that civilian and military systems now rely heavily on GPS and that GPS jammers have become available and affordable.

"Widespread and well-conceived jamming during conflict would impact both civilian and military users of GPS," he said, noting that in the ten years since China shot down a satellite in 2007, there have been many studies but not much in the way of satellite system defenses.

The Russian Federation meanwhile has been busy testing its ability to disrupt satellite nav systems. The C4ADS report identifies at least 12 GNSS disruptions in Russia and Syria since 2016.

The report says Russia uses these capabilities not only to protect VIPs and strategically-important infrastructure but also "to promote its ventures at frontiers in Syria and Russia’s European borders."

The C4ADS report concludes that improved public awareness of the threat to satellite nav systems is needed to formulate proportional responses by the private sector to attacks and also to foster discussion about threat mitigation. ®