Disruption is back, baby! 'We've all taken a dramatic base pay cut' beams boss of Intel's tech cash-injection wing 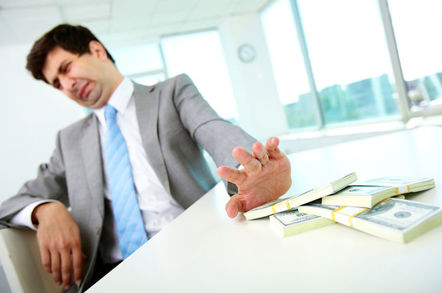 Intel Capital Remember when "disruption" was the big buzz word – before tech bros managed to ruin it for everyone? Well, like denim jackets, it's back, baby!

Chip giant Intel today outlined what companies it has invested in this year through its Intel Capital investment arm, and the thread is, yes, disruption: disruption in artificial intelligence, disruption in communications, in manufacturing and in healthcare.

That's not the only throwback either: Intel Capital CEO Wendell Brooks explained that the $391m it put into 48 companies in 2018 is designed to "add value" for the chip manufacturer. Remember value-add?

Oh, and Intel is shifting to performance-based pay. "We've all taken a dramatic base pay cut," explained Wendell, adding that Intel Capital's staff is now reliant on the success of their portfolio companies to make up their income.

What's going on? Why has the lumbering giant that is Intel gone back to the future? Part of it is Brooks: he explained on stage in Arizona at the investment arm's annual conference that when he took over as CEO, it was a "passive investor" but now it's focused on using Intel's financial might to push new technologies.

But the bigger picture is that the entire tech market has changed and slowed: Facebook is no longer an exciting upstart but a behemoth facing federal regulation; the tech "unicorns" are finally entering the big leagues and the public markets – with Lyft first off the blocks earlier this month; and Intel's new monster announcement, due tomorrow, is about a new set of data center tech that, well, builds incrementally on everything that has come before.

On stage, the usual cries of excitable tech expansion have been replaced with discussions over what small companies should do when they face a downturn. "The US is hurting, China is hurting," super-investor Lip Bu Tan warned, before advising companies to build a cash safety cushion to last them 18 months.

The tech world has slowed after a decade sat atop a rocket. And that means it's time for the small guys again, to get into the cracks and break up the foundations. So what have we got in terms of disruption? Quite a lot of interesting ideas as it turns out.

We spoke to many of the new CEOs that Intel has invested in and in each case they are clear that their products challenge the status quo in a way that it will be hard to respond to – in large part because they undercut the very business model incumbents depend on.

Rather than talk about being bought out by the big boys, these CEOs hope to make it on their own. Many of them noted with pride that they haven't gone the private VC route.

OnScale is offering on-demand simulation software for engineers to test new models and designs. Its CEO, Ian Campbell, claims that the dominant players in the modeling market are simply not capable of offering his cloud-based modeling because of how they are structured.

Something that his service can turn around in an hour and cost $300 would require hundreds of licenses from competitors like Ansys and cost several thousand dollars. His business model is consumption-based.

What's the practical benefits? One example, according to Campbell, is the latest fingerprint detection tech built into smart phones has only been possible thanks to the millions of different permutations and combinations of fingers that have been tested. What companies used to have to do with physical prototypes – a much slower and more expensive process – can now be modeled with computers via the cloud.

Tibit has come up with a tiny optical broadband module that fits into a standard Ethernet port slot rather than using bulky dedicated hardware to connect.

"They said it couldn't be done," its CEO Richard Stanfield proudly boasted before showing off the tiny metal box and saying that Intel's investment money will be used to make the product available commercially later this year.

For anyone running large networks, it could be a game-changer: a much smaller and cheaper way of getting internet access to people. Less power consumption at a lower cost in a smaller space.

You are not the product

Mighty Networks threatens to pull the small business rug out from under social media giants like Facebook, Instagram, YouTube etc by giving people that have built networks on specific topics a way to make money that sits outside of those companies' control.

The biz allows people – everyone from a woman in Australia making car repair videos to an author with a social message – to use social media as a funnel that pulls people onto their website and into an app where they can meet and interact with like-minded souls.

The difference is that you and your customers are no longer the product: Mighty Networks focuses on helping people figure out how to make money from their hard work and their network by analyzing what people want and what they are willing to pay for. Is it a live event? Is it an online course? How much do you charge? How often do you offer it?

Using machine learning, CEO Gina Bianchini claims to be able to segment people in new ways, outside the traditional marketing groups built around age and income. And her company makes money from monthly service charges, not by selling people's private data to third-party advertisers.

Pixeom CEO Sam Nagar promises that his company will "do for edge computing what VMware did for the data center."

His software can be installed on systems like electronic cash registers, with all the resulting data sent and analyzed at a central location. It says it can be up and running in under an hour on existing systems, potentially giving all kinds of businesses the ability to do the kind of company-wide data analysis that retailers spend an inordinate amounts of time and energy pulling together.

And so on and so forth: new specialist artificial intelligence chips; medical analysis; gaming in the cloud. Disruption is back and ready to shake things up. Should be fun. ®