Gizmo axed because it wasn't good enough, ran too hot 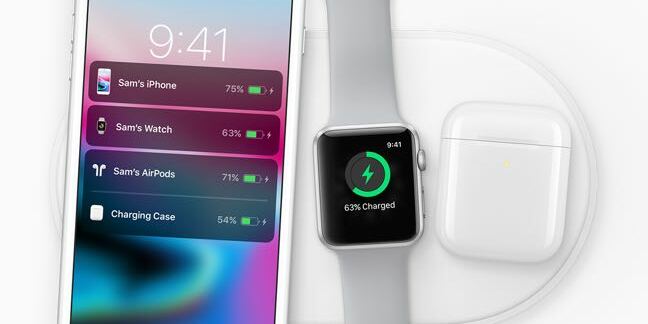 Apple's latest foray into wireless charging has ended with the cancellation of the AirPower, the white disc that was supposed to be able to power multiple iThings simultaneously.

Two years ago, Apple acquired a New Zealand-based startup called PowerbyProxi as it prepared to develop the AirPower for its various devices. On Friday, the fruit-themed kit-code-cloud biz called it quits, abandoning the project entirely before it could ship.

“After much effort, we’ve concluded AirPower will not achieve our high standards and we have cancelled the project," said Dan Riccio, SVP of hardware engineering, in a statement sent to various publications (Apple eschews The Register.

"We apologize to those customers who were looking forward to this launch. We continue to believe that the future is wireless and are committed to push the wireless experience forward."

Apple announced AirPower in September 2017, promising that it "will allow iPhone 8, iPhone 8 Plus or iPhone X customers to simultaneously charge up to three devices, including Apple Watch Series 3 and a new optional wireless charging case for AirPods."

The cancellation came suddenly enough that Apple included an image of the product on its just-released AirPod 2 packaging.

Yet AirPower's demise was not unexpected. Daring Fireball blogger John Gruber reported hearing from sources at an Apple event last fall that the project was in trouble.

"What I’ve heard, third-hand but from multiple little birdies, is that AirPower really is well and truly fucked," he wrote. "Something about the multi-coil design getting too hot — way too hot. There are engineers who looked at AirPower’s design and said it could never work, thermally, and now those same engineers have that 'told you so' smug look on their faces."

Meanwhile, Craig Lloyd at iFixit reckons there was an interference problem, too.

The engineering failure calls into question the company's hardware commitment (or at least competency) at a time it's looking toward services to boost revenue. Apple on Monday held a promotional spectacle to tout its upcoming movie, game and news subscription services, seen as a way to continue growth in the face of flattening hardware sales.

On Twitter, more than a few people expressed concern about whether the AirPower surrender bodes ill for Apple's long-delayed Mac Pro reboot, the follow-on to its poorly received 2013 "trash can" redesign.

Apple's hardware record has not been stellar recently. Its laptop "butterfly" keyboards elicited enough complaints and lawsuits that the company sleeved the internals to prevent dust from blocking the optical sensors. And recent iPhone X and MacBook Pro models have suffered from display and drive issues respectively.

And that's on top of a debate that has been raging for the past few years about Apple's software quality.

The Register asked Apple for comment. We haven't heard back and we're not surprised. ®