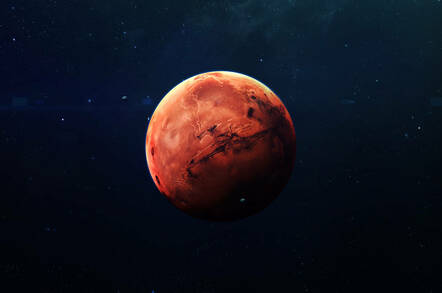 While Mars looks like a sterile, bleak, and dry wasteland, pockets of salty water may lie deep beneath that rust-colored dust, according to a paper published Thursday in Nature Geoscience.

There is mounting evidence that, once upon a time, the Red Planet may have been covered by a large ocean, though where it all went is still a bit of a mystery. We know water in the form of ice and vapor is present on Mars, and there are signs it also exists in liquid form: it's believed these dark streaks were created by minerals binding to water running over the alien world's surface during summertime.

That surface water theory was offered by NASA in 2015. Now, stateside scientists at the University of Southern California (USC) have studied the streaks, and drawn a very different conclusion – that the dark marks were formed from underground water rising up, rather than streams of surface liquid.

“We suggest that this may not be true,” said Essam Heggy, coauthor of the paper and a research scientist at USC. “We propose an alternative hypothesis that they originate from a deep pressurized groundwater source which comes to the surface moving upward along ground cracks.”

The eggheads reckon the source of these watery leaks could be from swellings of groundwater 750 metres below the Martian surface. The team believe tectonic activity from meteorite impacts carve these crevices in the surface, allowing pressurised groundwater to seep out to create the streaks.

“The experience we gained from our research in desert hydrology was the cornerstone in reaching this conclusion,” said Abotalib Z. Abotalib, first author of the paper and a postdoctoral research associate at USC. “We have seen the same mechanisms in the North African Sahara and in the Arabian Peninsula, and it helped us explore the same mechanism on Mars.”

The presence of groundwater shows that Mars and Earth may be more similar to one another than previously thought. It could also provide clues to what our own planet might look like if the Earth were to lose its atmosphere and/or magnetic field, as Mars has. And, of course, the groundwater could be used by future colonists, if it exists.

“Understanding Mars' evolution is crucial for understanding our own Earth's long-term evolution and groundwater is a key element in this process,” said Heggy. "It helps us to understand the similarities to our own planet and if we are going through the same climate evolution and the same path that Mars is going." ®