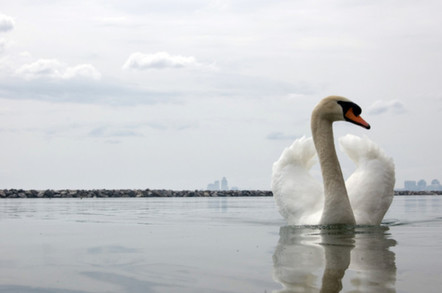 Crap, get the pepper spray

There, it found itself surrounded by police officers wielding, of all things, riot shields and a loaf o' breed (sorry) as they tried to herd the beastie back to its stomping ground.

One Alison Robertson filmed the, er, drama as it unfolded from the windows of her home.

"From when it lands on the main road to getting it back up to the dam, the whole thing lasted about 30 minutes," she told the newspaper.

"I grew up on that street and this same thing happened every so often, if it wasn't swans it was ducks."

She uploaded her clip to Facebook with the flavour text: "Even the swans in Greenock are mental."

The Record, too, tries to paint the winged nightmare as "angry" – but idle review of the footage shows a very relaxed, casual outing as the swan enjoyed snaffling the trail of breadcrumbs introduced by a passerby.

When it stopped to take in the majestic sights of Greenock, one of the cops gave it a little boop with the shield to usher it along.

It is not clear whether the swan was safely returned to the park or if it disemboweled the retinue once cameras stopped rolling.

Scottish taxpayers – this is where your hard-earned dosh goes. Two police vans, £20-30k each more or less, three police officers maybe on £30k each, loaf o' breed almost £2, which was probably claimed on expenses.

So we're approaching £200k to defuse this situation already.

But the approach is all wrong. Swans can be dangerous – indeed, at least one is suspected of murder – when defending their nests and young.

If it was a lairy toonser running amok, they would have Tazed the bas' and chooked 'em in a pond.

But no, a swan requires a good half-hour of pussy-footing through the streets, holding up traffic and making Scotland's law enforcement professionals look like absolute bampots. ®