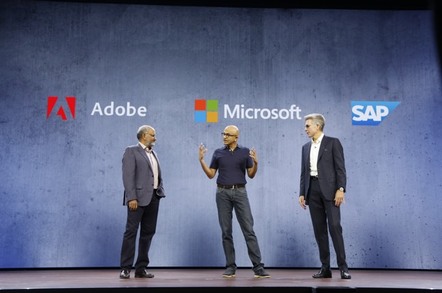 Organisations that fancy pushing data from Adobe, Microsoft and SAP platforms into a single data lake will soon be able to – and it won't just be on Azure – the firms have said.

The trio announced plans for an "Open Data Initiative" last year, but revealed precious little detail at the time. However, yesterday they used the Adobe Summit in Las Vegas to offer up some more info on the project, and announced an advisory council that will help steer the work.

Broadly, the aim is to allow companies to connect data from various siloed platforms and feeds, and combine it to generate business intelligence and insights. This, at least, is the aim.

The project is targeted at companies' obsession with gaining a "single view" of the customer, and is supposed to save firms' the time, effort and money involved in transforming and bringing together the data from disparate sources in the first place.

The name of the project, though, is a bit of a misnomer, given that it isn't really open data – in fact, it's a data lake. The idea is to let organisations that use Adobe Experience Cloud, Adobe Experience Platform, Microsoft Dynamics 365, SAP C/4HANA or S/4HANA to easily move data in and out of repositories.

The three software vendors might argue that the "open data" bit comes from the fact they are creating a common data model to improve interoperability between their applications and platforms – but we don't think this would convince the real open data proponents.

It was initially expected that the data lake in question would be an Azure repository, but the latest release refers to data being stored in a "customer-chosen data lake".

Microsoft, Adobe and SAP said they will launch a new approach for publishing, enriching and ingesting initial data feeds in the coming months.

They have also announced a Partner Advisory Council, in a clear bid to convince customers there is value in the project, and that big names are going to be helping the Adobe, Microsoft and SAP develop it.

Among the companies on the list are data-hungry outfits from a range of sectors, covering outsourcers, consultancies, media houses and health firms that might be interested in pouring data into this unified data lake.

"Our customers are all trying to integrate behavioral, CRM, ERP and other internal data sets to have a comprehensive understanding of each consumer," stated Stephan Pretorius, CTO of WPP, one of the firms on the panel, in a canned statement. "They're struggling with the challenges of integrating this data."