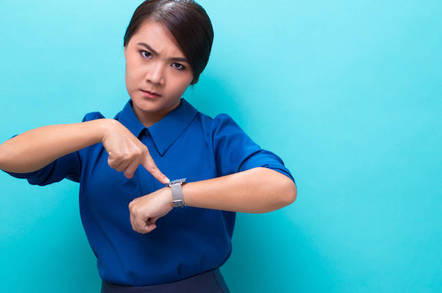 Andersen is both a Novell refugee and, as he approaches his 16th full year at Microsoft, a survivor of the transition from chair-flinger-in-chief Steve Ballmer to Satya Nadella.

Naturally, he was keen to talk Defender and WVD, but (like pretty much all Windows users) boot times are a particular bug-bear. As many Reg readers know, Windows 10 devices can sometimes require users take a trip to the bathroom, make a fresh cup of coffee and have a stretch, before a usable cursor finally crawls onto the screen.

Andersen acknowledged the problem and, citing a CFO at a "very large corporation" (we're guessing not Luca Maestri), told us the unfortunate exec "had been late to a Skype for Business call because it took him eight minutes for his PC to boot".

Our take would be that CFOs are just as bad as the rest of us for making up excuses for tardiness. Better than "the cat ate my webcam" anyway.

For Anderson, however, the problem runs a bit deeper. Once issues such as replacing spinning disks with silicon and adding more memory have been dealt with, there is no getting away from the habit enterprises have of loading up their systems with agents.

As any good BOFH will tell you, securing and managing a corporate machine requires festooning the unfortunate equipment with lots of extra bits. The net effect is, according to Anderson, an increase from a stretch of around 25 seconds from "power on" to productivity, to a period of three or four minutes.

Doubtless enviously eyeing a certain fruity computer maker, Anderson told us that employee "expectation about what the experience is going to be is really based upon what their phone experience is. Which is just instant on.

"If IT gives a large screen, say a Windows device, and it has a five-minute boot, think of the cultural impact that has now where the employee goes like, 'Wow, my IT organization must be super old fashioned because the device that they give me to work on is just slow'."

Or perhaps the finger of fault gets directed at a Redmond-based software giant. Anderson conceded: "And they could be blaming Microsoft."

The solution, he said, is to (unsurprisingly) go all-in on Microsoft's tech. Because, after all, it is built into the OS. He refers to this as "going Microsoft 365 native". The theory being that there are now enough tools in the Microsoft 365 ecosystem to not require dozens of agents to be installed locally.

Anderson used the example of an unnamed large US bank: "They had more than 20 agents on their device, they went down to just two. And their boot times went from three minutes to 20 seconds."

Of course, to go native really requires that enterprises finally make the jump to Windows 10 from the soon-to-be-unsupported Windows 7.

Anderson hinted at just how much telemetry is captured as he attempted to ease worries about those crusty apps on which corporates depend failing to survive the transition: "What we are seeing right now is 99.9 per cent of all the apps that we are seeing on Windows 7 are compatible for Windows 10 and we can prove that with the data.

"With Desktop App Assure we've now looked at close to 50,000 applications that customers have brought to us and they've said we think these 7,000 have got compatibility issues. Of those 7,000, we've only seen 41 that actually have a compatibility issue."

Desktop App Assure is Microsoft's policy to deal with customer fears over compatibility. Referring to himself in the third person, Anderson put it this way: "If you think you have an application that has a compatibility with Windows 10, you can call Brad's team, we'll look at it. If it's a Windows issue, we're gonna go fix Windows to unblock you. If it's an issue with your app, we'll help you fix your app so you can get unblocked."

He added that the telemetry shows "more than seven million win32 apps around the globe that people are using".

From driving to shipping

With an eye on his long-running "Lunch Break" video series, we also asked Anderson who his ideal guest would be.

For those unfamiliar with the format, Anderson drives around the Microsoft campus with an interviewee in the car. Think The Late Late Show with James Corden's carpool segment, but considerably nerdier. In one episode, uploaded in February 2018, Anderson interviewed his then-new boss, Windows supremo Terry Myerson.

Myerson, of course, jumped ship the following month. One can but wonder if that episode ended with Anderson performing a handbrake turn at the entrance to the Redmond campus, sending Myerson flying from the vehicle (spoiler: the episode actually ends with Myerson 'fessing up that the "great work in Vista" didn't, er, "land very well").

A budget increase has seen the format move to an achingly retro studio set, filled with ageing hardware, called "The Shiproom". Anderson brought veteran Microsoft watcher Mary Jo Foley into the studio and told us "we put our lie detector on her and gave her a test".

When pressed, Anderson flinched at the suggestion that a fireside chat with CEO Satya Nadella might be in order, admitting he'd "probably be nervous", before gushing that his perfect guest would be anyone who has successfully gone Microsoft 365 Native.