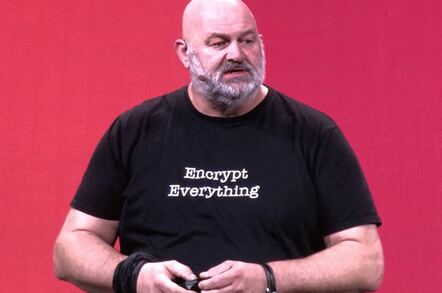 Ah, the ol' ransomware motto ... Werner Vogels lays it all out

Amazon devs and users are gathering in Silicon Valley as Amazon Web Services hosts its AWS Santa Clara Summit '19 on Wednesday and the former book vendor used the event to announce a veritable cornucopia of new stuff.

At the show the cloudy side of Amazon announced the availability of block storage-infused AMD-based M5ad and R5ad instances for EC2, which cost 10 per cent less than Intel-based M5 and R5 instances. Based on EPYC 7000 chips and tuned for memory-intensive workloads, these are distinct from the AMD-based M5a and R5a instances without block storage that showed up last November.

It also debuted a form of S3 storage even slower and more affordable than its Glacier service called Glacier Deep Archive, for records needed so seldomly that you can afford to wait half a day to retrieve them.

The product dump continued with AWS Deep Learning Containers, a way to spin up Docker images preconfigured for machine learning tasks. AWS App Mesh takes the open source Envoy proxy and makes it available for routing and monitoring traffic between other AWS services like Fargate, EC2, ECS, ECS for Kubernetes or plain ole' Kubernetes. And Concurrency Scaling for Redshift reached general availability, as did the AWS Toolkit for IntelliJ.

Amazon VP and CTO Werner Vogels presided over the event wearing a t-shirt bearing the words, "Encrypt Everything," a message AWS customers with misconfigured S3 buckets might want to take to heart.

He made reference to his fashion statement midway through his keynote when he touched on the need for continuous security, as opposed to fixed firewalls. Brute force attacks, he said, seldom happen anymore. Now, the real risk is social engineering.

Lamenting the effectiveness of phishing messages, he said, "There is always an idiot who clicks that link," a sentiment that really deserves its own t-shirt.

His advice for customers sounded more conciliatory: "Given that we build encryption into almost all AWS services, make use of it."

But Vogels had more on his mind than showed on his shirt: education, he insisted, not marketing. "As always, I consider these events to be educational events and not sales events," he said.

Still singing the cloudy gospel, even to the converted

A more accurate term would be evangelism, where information spins in the direction of advocacy for the cloud computing model AWS defined and dominates.

Rewind to the 2006 when CEO Jeff Bezos himself made the rounds to business and IT publications, pitching the idea of pay-by-the-drink infrastructure. AWS was a hard sell at the time, because large companies had little reason to trust this peculiar form of outsourcing.

Thirteen years on, the message has gotten out. The cloud is no longer an experiment; it's rentable compute infrastructure made palatable for almost any application and industry. But old habits die hard and because there are still companies that haven't become AWS customers, the cloud gospel will continue to be preached.

Vogels provided the obligatory business update, noting that AWS reached an annualized revenue run rate of almost $30bn as of Q4 2018 and is growing year-on-year at 45 per cent. For those still wary of cloud computing, the message is AWS is not some experiment that will shutdown for lack of traction; it's a part of millions of businesses.

To underscore that message, partners and customers stopped by to recount tales of success. F5 Networks CEO Francois Locoh-Donou stopped by to announce F5 Cloud Services, for application security, delivery, and analysis, is available through the AWS Marketplace. Satheesh Ravala, SVP cloud engineering and operations at mortgage biz Ellie Mae, also took a moment to tell conference attendees that the firm intends to go all-in on AWS by 2020.

Mention was also made of Volkswagen Group's multiyear deal with AWS to build the Volkswagen Industrial Cloud, a cloud platform the automaker is developing with AWS to automate its manufacturing and logistics processes across more than 30,000 facilities.

Vogels wrapped up by revisiting security. "Security is everyone's job," he said.

As for cloud computing, more and more that is Amazon's job, it seems. ®