There are pictures all over the internet of a big dark spot on Uranu... Oh no, wait, it's Neptune 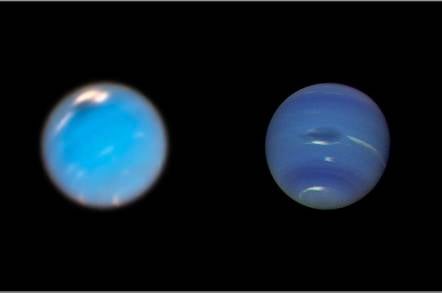 Fresh storms rip through Neptune’s skies every four to six years creating a blemish known as the Great Dark Spot – and scientists have clocked another formation of the planetary wonder using the Hubble space telescope.

Boffins have seen these spots appear six times over the years, ever since Voyager 2 first spied them in 1989. Like Jupiter’s Great Red Spot, Neptune’s Great Dark Spot is a storm brewing in the planet’s atmosphere under high pressure conditions. The similarities between storms on both planets end there, however. Jupiter’s storms can rage for hundreds of years. In fact, the Great Red Spot has been seen since 1830 and could be up to 350 years old.

The ones on Neptune peter out much more quickly and can last up to six years. Two-year storm lifespans are more likely to be the norm, however, according to the paper published in the journal of Geophysical Research Letters on Monday. The research documents pictures taken of Neptune in 2018 by Hubble, which, upon examination, just so happened to capture the birth of the planet's latest great spot.

“It was certainly a surprise,” said Amy Simon, first author of the paper and a planetary scientist at NASA. “We were used to looking at Jupiter’s Great Red Spot, which presumably had been there for more than a hundred years.”

Simon and her colleagues at the the University of California, Berkeley, decided to focus on the growth of Neptune's 2018 Great Dark Spot. They were earlier studying a smaller dark spot that appeared in 2015, when they found a smattering of small bright white clouds covering a region of Neptune’s surface. Then, when looking at pictures taken three years later, another Great Dark Spot popped up in the same region where the clouds were previously swirling.

“We were so busy tracking this smaller storm from 2015, that we weren’t necessarily expecting to see another big one so soon,” Simon said. The white color of the clouds is from the methane ice crystals, and they were the brightest in 2016 and 2017, leading up to the full storm in 2018.

Simulations show that the brighter these white clouds, the deeper the storm. The storm's winds whipped on Neptune spread widely in the planet’s atmosphere and over time these break apart the Great Dark Spot. The researchers hope to study the shape of the vortex and measure the wind speeds in the storms to study the planet’s bizarre weather patterns.

“We have never directly measured winds within Neptune’s dark vortices, but we estimate the wind speeds are in the ballpark of 328 feet (100 meters) per second, quite similar to wind speeds within Jupiter’s Great Red Spot,” said Michael Wong, co-author of the paper and a planetary scientist at the University of California, Berkeley.

“If you study the exoplanets and you want to understand how they work, you really need to understand our planets first,” Simon added. “We have so little information on Uranus and Neptune.” ®