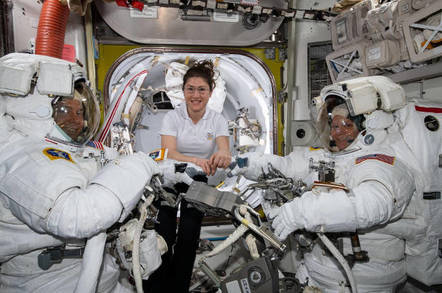 NASA's first-of-its-kind all-women spacewalk, due to take place this week, has been scrapped - in part due to a lack of spacesuits that fit.

On March 29, International Space Station 'nauts Anne McClain and Christina Koch, were due to suit up and head out into the obsidian void to replace a set of batteries on the orbiting science lab. Fellow astronaut Nick Hague and McClain had popped out last week to switch out another set of power supplies.

Thus, McClain and Koch were all set to perform the world's first all-female spacewalk, however, that pioneering giant leap for womankind has been called off due to a lack of equipment that fits. Instead, Koch and Hague will carry out the work. McClain will, or so it is planned, get her chance to step outside again on April 8 with Canadian 'naut David Saint-Jacques.

The rub appears to be that McClain and Koch need a medium-size hard upper torso component of the spacesuit, and only one will be ready for Friday. In a statement, the US space agency said today:

Koch had been scheduled to conduct this spacewalk with astronaut McClain, in what would have been the first all-female spacewalk. However, after consulting with McClain and Hague following the first spacewalk, mission managers decided to adjust the assignments, due in part to spacesuit availability on the station.

McClain learned during her first spacewalk that a medium-size hard upper torso – essentially the shirt of the spacesuit – fits her best. Because only one medium-size torso can be made ready by Friday, March 29, Koch will wear it.

McClain was the 13th woman to walk in space, making Koch the 14th if all goes to plan this week, out of hundreds and hundreds of guys who have suited up and floated through the freezing oblivion. The pair graduated from NASA's astronaut class of 2013, half of which were women, so there's a very good chance we'll finally see an all-women spacewalk soon.

Once they get suit kit that fits, of course. ®