It only took three fscking hours of keynote to announce it – where's the GPU optimization for that? 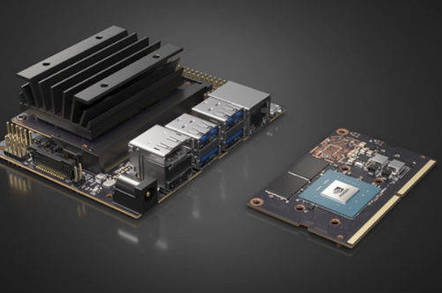 GTC It's that time of year again. Jensen Huang, Nvidia’s CEO, paraded a range of goodies for GPU nerds, including a forthcoming credit-card sized AI computer board and software updates for its CUDA platform, during his company's annual GPU Technology Conference (GTC) in Silicon Valley on Monday.

There is nothing that’s too eyebrow-raising, unfortunately. In fact, a good amount of it was stuff previously announced, and upstaged by Intel's earlier announcement that it was, as expected, building America's first exascale supercomputer using its own GPUs and CPUs. Uncle Sam's two fastest known supers use Nvidia accelerators and IBM Power processors.

If you’re looking for new and exciting architectures from Nvidia to train your beefy neural networks at ever increasing speeds, you’ll have to keep waiting. But if you want to tinker with mini AI kit then you’ll maybe want to keep reading.

Here are the highlights of what was new during the big cheese's Monday afternoon keynote:

We'll be covering more talks and announcements from GTC this week: stay tuned. ®