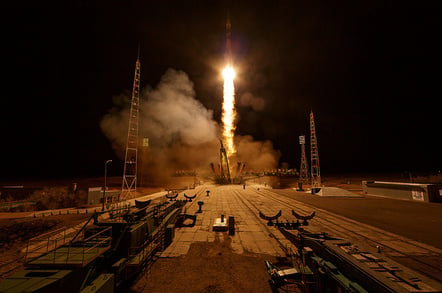 It was second time lucky for NASA astronaut Nick Hague as he and fellow crew members Aleksey Ovchinin and Christina Koch arrived at the International Space Station (ISS) this morning.

Depending on where you reckon space actually starts, it was Hague's second or first trip into the void.

His first crack at reaching the orbiting outpost ended when the Soyuz on which he and Ovchinin were riding went a bit explodey following some shoddy assembly by Russian workers that bent a sensor on the rocket.

The error meant that the separation of one of the four strap-on boosters of the venerable Soyuz did not go to plan. Not so much a Korolev Cross, more a TITSUP* "T"-shape. One of the boosters failed to separate correctly and reconnected with the big metal bag of rocket fuel.

Hague and company made a safe but rapid unscheduled return to Earth thanks to the Soyuz's abort systems, and the boss of the Russian space agency Dmitry Rogozin assured the duo that they would be flown again.

Congratulations to @AstroHague! Nick Hague, our astronaut who was forced to abort his recent Soyuz launch in October, will be headed to the @Space_Station on February 28, 2019. He will be joined by @NASA astronaut @Astro_Christina and Russian cosmonaut Alexey Ovchinin. pic.twitter.com/JcPom1KRm7

Rookie NASA astronaut Christina Koch was scheduled to be on MS-12. The rest of the original crew were bumped to a later flight.

The Soyuz-FG booster left the Baikonur pad at 19:14 UTC on 14 March and deposited the spacecraft into the correct orbit without incident. Following a chase lasting nearly six hours, Soyuz MS-12 performed an automated docking with the outpost at 01:01 UTC on 15 March. Hatches were opened just over two hours later.

The arrival of the trio brings the crew complement of the ISS back up to six, and the gang has a busy few months ahead of them, including spacewalks to change out batteries on the station. Koch will also be taking part in the first all-female EVA with fellow NASA 'naut Anne McClain, assuming all goes to plan.

Hague also stands a good chance of being aboard the station to welcome the uncrewed version of Boeing's Starliner capsule and possibly witness the first crew aboard a SpaceX Crew Dragon nab the flag left behind by the last Shuttle back in 2011. ®