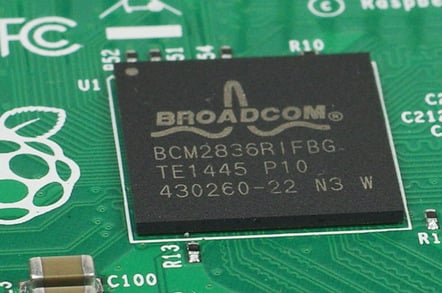 CA Technologies made an indelible mark on new parent Broadcom's latest set of quarterly financials – well, it did cost $19bn to buy – as software and not semiconductors accounted for all of the growth.

"Additionally, our infrastructure software segment performed extremely well as we made good progress with the CA business integration into Broadcom."

Until recently, Broadcom could be best described as a chip designer, famous for "merchant silicon" used in countless networking products, but the acquisition of CA Technologies in the middle of 2018 thrust the company into the business software market.

Broadcom went for CA after US prez Donald Trump's administration blocked its $117bn attempt to acquire American chip designer Qualcomm in March of last year, citing national security concerns. The deal could have become the largest tech merger in history.

The very next month, Broadcom lifted and shifted its headquarters from Singapore to California in the US, allowing it to avoid similar pain in its acquisition of CA.

More recently, Broadcom was reported to be interested in buying its competitor Mellanox; instead, the company was acquired by Nvidia for $6.9bn in cash earlier this week.

Of course, this recent deal was mentioned in the earnings call – but Tan was quick to shift the focus back to CA. "I say we have done quite a bit of acquisitions in very strong assets in the semiconductor space... but you also know we're not necessarily limiting ourselves to that. We look towards broader areas of technology, software, and appliances, as Brocade would be considered.

"We tend to do it at a very measured pace simply because it's important. In fact it's critical in any acquisition we make that we can integrate it very, very well.

"And that's what we're doing with CA right now."

On paper, the infrastructure software division was responsible for 24 per cent of the company's overall revenue for the quarter, or $1.4bn – considerably more than the $513m it earned the previous quarter.

Tan added that software was turning out to be a "very, very nice deal" for Broadcom and revenue from "core customers" was growing in double digits.

The bigger chunk of Broadcom, semiconductors, failed to report any growth, declining 12 per cent year-on-year to $4,374bn. This was "driven almost entirely by the seasonal drop in wireless", Tan claimed. IP licensing fell to $12m from $44m.

Now here's an interesting thing: Stacy Rasgon from Bernstein Research noticed that despite the sudden growth of the infrastructure software business, Broadcom did not revise its overall guidance for 2019, published in the previous quarter. This could mean one of three things: that the company expects this growth to slow down considerably; that it sees problems with its core semiconductor business; or that it is simply being conservative with its estimates.

"I'll leave that to you, Stacy, to figure out," replied CFO Tom Krause.

Following the CA deal, total expenses for Q1 went up 57.4 per cent year-on-year to $2.653bn due to a rise in R&D, selling, general and admin costs, amortisation of intangibles and restructuring charges. This left operating profit at $555m down from $943m.

Interest expenses chopped profit before tax to $278m but a lovely $203m tax benefit, minus a loss from discontinued ops, left Broadcom with a $471m net profit. This compared to $6.566bn a year ago when the firm benefited from the enactment of the US Tax Cuts and Jobs Act. Some of the proceeds of which, ironically, were used to pay for the restructuring. ®