It may have an asteroid belt, worlds similar to Earth and Neptune – and only 470 light years away 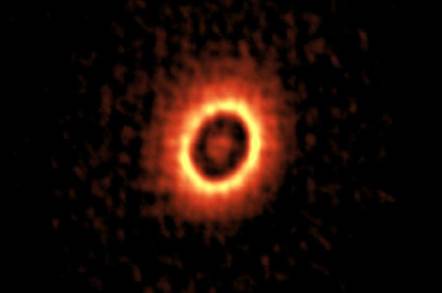 If, like us, you're dying to get off this ridiculous little rock, here's some hope* to cling onto.

There’s a planetary system slowly forming about 470 light years away from Earth that looks uncannily like our Solar System in its younger days.

An image taken by the Atacama Large Millimeter/submillimeter Array (ALMA), an interferometer fashioned out of 66 telescopes in the Atacama desert in Chile, shows a fuzzy red blob surrounded by bright concentric rings.

The blob is a young star known as DM Tau, and the rings around it are dust and other cosmic debris. DM Tau is a small star, about half the mass of the Sun and is about three to five million years old. What’s intriguing is that the first circle is at a similar distance to where our own asteroid belt sits, and the second one is located at about Neptune’s orbit.

It’s difficult to make out with all that dust, but the researchers have a sneaking suspicion that the inner ring could harbor planets similar to Earth, while the outer ring could be hiding planets like Uranus or Neptune.

“Previous observations inferred two different models for the disk around DM Tau,” said Tomoyuki Kudo, an astronomer at the National Astronomical Observatory of Japan and co-author of the study published in The Astrophysical Journal, on Thursday.

“Some studies suggested the radius of the ring is about where the Solar System’s asteroid belt would be. Other observations put the size out where Neptune would be. Our ALMA observations provided a clear answer: both are right. DM Tau has two rings, one at each location.”

The research is being presented at the annual meeting of the Astronomical Society of Japan this week. The team are particularly intrigued with the inner ring.

It’s believed that asteroids delivered water, a vital ingredient for life, onto Earth when they crashed into its surface. If DM Tau’s system is, indeed, like the Solar System and has an Earth-like planet forming within a of the ring known as the “water snowline”, it’s possible that water might be transported onto its inner planet too.

“Should terrestrial planets be forming inside its snowline, water delivery from the inner ring onto the inner planets might be plausible,” according to the paper. That could mean there is life in that system, or habitable conditions. Or they could be harsh barren rocks.

Jun Hashimoto, a researcher at the Astrobiology Center in Japan said studying the region could help scientists understand how the Earth formed around the Sun over 4.5 billion years ago: “The distribution of dust in the inner ring around DM Tau will provide crucial information to understand the origin of planets like Earth.” ®

Basically: Not you, just 'the usual suspects'