Welcome. You're now in a timeline in which US presidential hopeful Beto was a member of a legendary hacker crew

From O'Dork to O'Rourke: Dem golden boy's past as BBS-dwelling l33t teen revealed 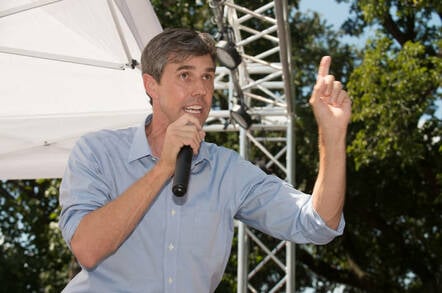 Newly minted US presidential hopeful Beto O'Rourke says he was a member of Cult of the Dead Cow, one of the most legendary hacking groups in cyber-history.

And multiple folks within the US-based crew, most active in the 1980s and 1990s, have confirmed that O'Rourke, during his adolescence in El Paso, Texas, was one of their own.

According to journalist Joseph Menn, author of a forthcoming book on the group and who broke the news today, O'Rourke's links to cDc were kept under wraps by members of the gang who feared it would hurt the Democrat's political aspirations. O'Rourke was a House representative of Texas from 2013 to January this year, stepping down so he could launch an ultimately unsuccessful bid to take Ted Cruz's senate seat in the Lone Star State.

O'Rourke, who has now thrown his hat into the ring for the 2020 presidential elections, however, has himself given Menn blessing for the news to go live.

"There's just this profound value in being able to be apart from the system and look at it critically and have fun while you’re doing it," O'Rourke, whose handle was Psychedelic Warlord, is quoted as saying. "I think of the Cult of the Dead Cow as a great example of that."

We're told that O'Rourke wasn't involved in the more nefarious parts of the hacker ring's activities, such as the development of tools to control hijacked Windows PCs. He did admit to circumventing phone bills and downloading cracked software, a common practice among members of underground BBS groups at the time.

That O'Rourke would be involved with the legendary Texas hacking crew is surprising, but hardly out of character. Part of O'Rourke's cachet in left-wing circles is his past as a punk rock musician in the US state, and strong counter-culture leanings.

Beto isn't the first Cult of the Dead Cow alumnus to aspire for a job in Washington, DC. Peiter "Mudge" Zatko, one of the most prominent members of the group, famously had a stint with DARPA in the early 2010s where he oversaw a number of infosec projects at the military research operation.

In the wake of today's report, Mudge has opted to play coy about his relationship with the presidential hopeful:

It’s his place to say something first on the topic before I say anything at all :) https://t.co/4pw1WU8p8z

Should Beto fall short in his bid for the presidency and be in need of work, he is welcome to submit his CV for a position with El Reg. We have form with this sort of thing. ®

DARPA to geeks: Weaponize your toasters … for America!

Stand-up and be counted²: Nerd is the funny word

Comedy Review A geek, a boffin and a dork walk into a bar ...

Back Orifice 2000 shows its face

Data Fellows step in to protect your modesty