Toshiba has pushed out its 2.5-inch XD5, a physically smaller gumstick format with a waspy 7mm thickness slotted into a larger case so that it can slip into standard drive bays.

The XD5, which was previously available in an M.2 gumstick format, is one of Toshiba's data centre-tastic SSD trio – based on the company's 64-layer 3D NAND flash – announced in March last year. Tosh also launched a 2.5-inch format CD5 at the same time, an NVMe PCIe gen 3x4 product with capacities from 960GB to 7.7TB. The third of the triad, the HK6-DC, has a SATA 6Gbit/s interface.

The XD5 it released today comes in a 2.5-inch form factor and its capacity ranges from 960GB through to 3.84TB – the same mid-range and high-end capacity as the M.2 version – but despite its physically larger case, it has a smaller entry-level capacity.

The performance specs are exactly the same as the M.2 XD5: 250,000/21,000 random read/write IOPS – heavily skewed towards read – and up to 2,700/895MB/sec sequential bandwidth. The M.2 version actually started out with slightly lower speeds but these were later uprated. 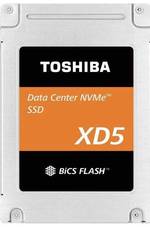 Although pricing is not yet available, by all indications the XD5 appears to be a cost-reduced 2.5-inch drive.

Like its small sibling, it's designed as a read-intensive data centre drive, and operates in a power-sipping 7W envelope. It has the same <1 drive write/day for five years, a five-year warranty, 2 million hours MTBF rating, and a sanitise instant erase option for data security.

The latest XD5 will sample-ship this quarter and, as a drive for OEMs, no prices were revealed. No datasheet is available yet either. ®