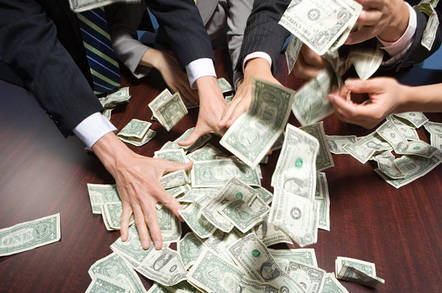 Oracle on Thursday reported revenues of $9.6bn for fiscal Q3 2019 – which is about what analysts anticipated and prompted the stock to bounce up and down indecisively in after-hours trading.

Analysts had expected $9.59bn in revenue and EPS of non-GAAP $0.84. The database giant has come in ahead of predictions more often than not over the past two years.

Oracle stock closed at $53.06 per share on Wednesday, a record high. Part of the stock's buoyancy has been attributed to the company's aggressive repurchase of shares, particularly over the past year. On February 12, the company told the SEC it has added $12 billion to its share buyback program.

Oracle on Thursday deployed an additional fiscal flotation device in the form of an inflated common stock dividend, now at $0.24 per share, up from $0.19 per share.

Revenue growth, on the other hand, has been largely flat, which is to say down one per cent or up three per cent in constant currency compared to fiscal Q3 2018.

Oracle co-CEO, Safra Catz said in a statement she was pleased with the results. "Our overall operating margin improved to 44 per cent as our lower margin hardware business continued to get smaller while our higher margin cloud business continued to get bigger," she said, noting that the company is positioned to deliver another year to "comfortably deliver another year of double-digit EPS growth."

In June 2018, Oracle stopped reporting its cloud revenue separately, making it more difficult to discern how the company is doing in its cloud business.

On a conference call for investors, Catz said, "Cloud is now more than double what it was three years ago."

Mark Hurd, also-CEO, celebrated the "stellar quarter" and recounted a number of customer wins while highlighting growth in the company's Fusion and NetSuite applications.

Hardware revenue came in at $915m, down eight per cent, or four per cent in constant currency year-on-year, while services contributed $786m, down one per cent, or up three per cent adjusted for currency fluctuations.

Oracle executive chairman and CTO Larry Ellison, speaking on the company's conference call, extolled the advantages of Oracle's cloud software, a suite of integrated business applications. "No other cloud service provider has such a comprehensive suite of front-office and back-office applications," he said, insisting that customers want their applications to work together.