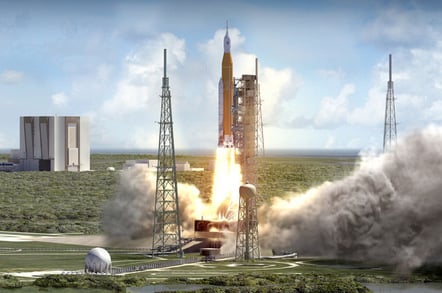 Not coming to a launchpad near you?

Fresh from a budget that has deferred the future of NASA's mega-rocket, the Space Launch System (SLS), the agency's own administrator has hinted that the present is looking iffy as well.

In a hearing yesterday, NASA administrator Jim Bridenstine admitted the agency had realised last week what many observers have suspected for some time: not only was the SLS not going to get off the ground in 2019, the not-later-than June 2020 date would probably be missed as well.

We need to consider all options to meet the Exploration Mission-1 target launch date of June 2020, including launching on commercial rockets. pic.twitter.com/fR5b2NzPtg

NASA has a rich history in missing launch dates, although to be fair to the agency, changes in the policies of US administration and inconsistent funding have played their part.

However, in this instance Bridenstine insisted: "We need to stick to our commitment." If NASA says it is going to launch in June 2020, then it jolly well will.

Of course, without a completed SLS (even in Block 1 form), sending the uncrewed Orion capsule and European Service Module (ESM) stack to the Moon will be a challenge. According to Bridenstine, the US does not have access to a rocket able to lift all the gear needed to perform the mission, dubbed EM-1.

Eyebrows then headed toward the ceiling as Bridenstine explained that two launches of a commercial heavy lift rocket could do that job. One could launch Orion and the ESM. The other could lift the upper stage required to send the spacecraft to the Moon.

Orion would, of course, need to dock with the upper stage. NASA has yet to come up with a plan for how that would work. Oh, and it all needs to be done by June 2020.

Bridenstine was careful not to name a commercial provider, although SpaceX's Falcon Heavy and United Launch Alliance's (ULA) Delta IV Heavy spring effortlessly to mind. The latter has a string of successful launches under its belt, including the December 2014 Exploration Flight Test-1 mission that sent an uncrewed Orion capsule into space to test the spacecraft's systems, heat shield and parachutes.

The decision to switch to a commercial provider has not been made, and regardless of what ends up being used for the EM-1 mission, Bridenstine was clear that SLS would be used for EM-2, describing the monster booster as "a critical piece of what the USA needs to build" in order to put the large objects into space. ®