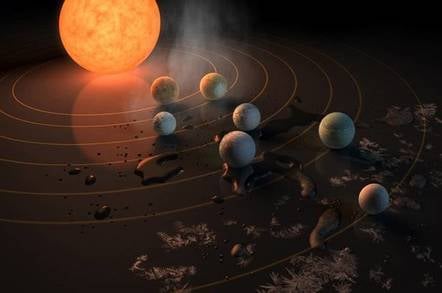 Boffins bored of time-consuming mathematics are turning to machine-learning code to predict the mass of exoplanets that aren't yet fully formed.

Budding planets are difficult to study. They grow in circumstellar disks by accreting mass and are shrouded by envelopes of gas. The final mass is predicted by guessing the planet’s interior structure based on its local environment and solving a set of differential equations.

“Although standard procedure, solving these internal structure equations can require a non-negligible amount of computer time, and lead in some cases to some numerical instability,” a pair of researchers from the University of Bern, Switzerland, explained in a paper released on arXiv this month.

So they decided to see if neural networks could help. The goal was to create a system that could take input variables such as the planet’s temperature, pressure, or luminosity, and spit out an output of its core mass or its gas envelope mass.

The researchers couldn’t completely escape the differential equations completely, however. To generate the training data, they had to calculate the masses for a range of dummy planets with different possible properties and split the database to be used for a training set, a validation set and a testing set.

"It took us three weeks to compute all these test cases using a code developed by Julia Venturini during her PhD in Bern," said Yann Alibert, co author of the paper and an astrophysics professor at the University of Bern. "Then, we trained this network using our gigantic database.”

The data set was used to train deep neural network (DNN) models using supervised learning. After sifting through the data, the models learnt to predict a planet’s core mass and envelope mass given some of its properties as inputs. The results showed that the DNN’s predictions were similar to the answers calculated by traditional differential equations.

“Using our DNN, the average difference between the predicted critical core mass and the one obtained by solving the internal structure equations is ∼1.67 per cent, with a majority (99.3 per cent) of the critical masses being predicted with an accuracy better than 5 per cent, and a maximum error of ∼14.2 per cent for critical masses larger than 1 [solar mass],” the researchers wrote in the paper.

"Now our network is able to predict the mass of a planet being formed under certain conditions with a very good accuracy and tremendously faster than solving the differential equations," added Alibert.

Although promising, the results should be taken with a pinch of salt as the DNN has yet to be tested on real observational data. That comes next. ®