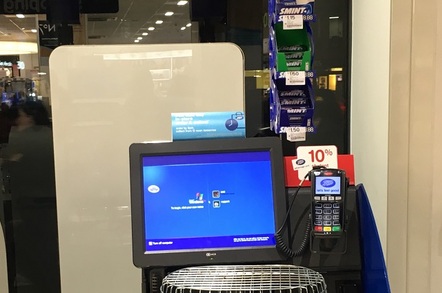 Fancy sticking a toe into the warm bath of nostalgia? UK retailer Boots is showing the old Windows XP login screen on a self-service terminal in its Islington store.

Spotted by Reg reader Reuben Heller, the point-of-sale (POS) terminal cheerfully displays the old XP login page, although staff have placed an upended basket in front of the machine to stop punters poking at it.

Windows XP has been out of support for a while now. However, some editions have lingered for years past the official death date. The Embedded Standard 2009 version finally had the plug pulled in January, and extended support for the Embedded POSReady 2009 incarnation will end on 9 April.

Boots isn't alone by any means in sticking with the elderly operating system. A POS at a Tesco store within kitten-flinging distance of Vulture Central was spotted giving itself a vigourous rubdown with CHKDSK last year. The terminal snapped in Boots is also an NCR model.

Microsoft has kept on patching POSReady 2009, with the latest updates focusing on TLS and Time Zone updates. The last appeared in December, just before Embedded Standard 2009 fell off its perch. The company would really like customers to just stop using the thing already, but updating a fleet of POS terminals presents its own particular set of challenges.

We contacted Boots to find out if the terminal was indeed on the last, lingering edition of XP or something altogether less supported, and what plans the retailer has for updating the equipment.

A mouthpiece said: "The Boots UK self-checkout services do currently run on POSReady 2009. However, we are upgrading our software to a newer version this year." ®