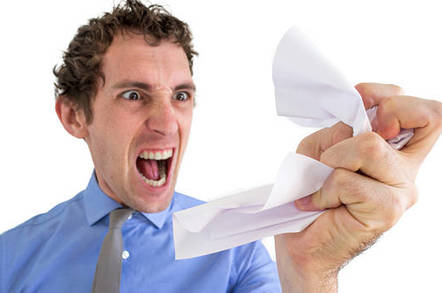 Misfiring UK mobile phone dealer The Carphone Warehouse was today slapped with a £29.1m penalty by the Financial Conduct Authority for "mis-selling" handset insurance over a six-and-a-half year period.

The dodgy practices came to light following whistleblower reports that prompted the FCA to probe the company between 1 December 2008 and 30 June 2015, before Dixons bought the comms retailer.

The FCA unearthed systemic "failings" that largely centred on a lack of appropriate training for sales teams on assessing if the policy was suitable or if clients were already covered by bank or home insurance.

The watchdog said sales heads were actually shown "spin selling" techniques to sell the features and were versed in "objection handling" to focus on overcoming concerns. Customers who reckoned they might already be insured were advised to buy the policy and cancel in 14 days if they discovered they didn't need or want it, the FCA said.

The probe discovered that for the five-plus year period under the spotlight, The Carphone Warehouse sold policies worth over £444.7m.

A "high proportion" of the policies sold to clients were subsequently cancelled early. The financial watchdog noted: "For example, in January 2014, 35 per cent of policies were cancelled within the first three months from inception. High cancellation rates are an indicator of a risk of mis-selling."

When customers complained, The Carphone Warehouse "failed to properly investigate and fairly consider their complaints," said the FCA. Therefore the complaints were not upheld and management did not have an "accurate impression of indicators of mis-selling".

As a result the watchdog concluded the retailer had breached Principle 3, 6, and 9 of its Principle/s for Businesses between the end of 2008 and mid-way through 2015.

Mark Steward, exec director of enforcement and market oversight at the FCA, issued a canned statement:

The Carphone Warehouse and its staff persuaded customers to purchase the Geek Squad product, which in some cases had little or no value because the customers already had insurance cover. The high level of cancellations should have been a clear indicator to the management of mis-selling.

Without whistleblowers coming forward, these practices may never have come to light. In the past few years, whistleblowers have contributed critical intelligence to the enforcement actions we have take against firms and individuals.

The Carphone Warehouse accepted the watchdog's findings and settled the fine early, getting a 30 per cent discount from the original £41.58m fine it was issued with.

In a statement to the London Stock Exchange, owner Dixons Carphone said it "accepted that in the past the company's practices fell short".