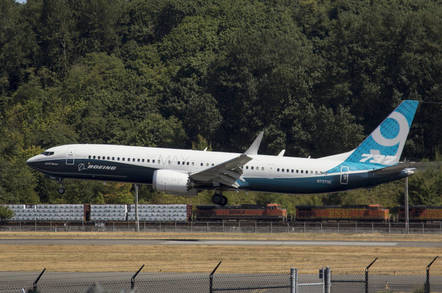 Canada and America have now banned Boeing 737 Max aircraft from flying anywhere over the Great White North and the Land of the FreeTM, pending the implementation of new safety measures and training programs.

This comes after several nations, from the UK to Japan, grounded the passenger jets after two Boeing 737 Max 8s crashed in the past four months, killing 346 people onboard. Boeing has promised to deliver a software update to prevent future similar tragedies – the pair of accidents have been linked to Boeing's anti-stall technology, MCAS.

Now, in the meantime, the US and Canada have agreed to block the troubled jets' flights out of safety concerns.

"Following advice from Transport Canada Civil Aviation experts, as a precautionary measure, I am issuing a safety notice to address this issue," Canada's Minister of Transport Marc Garneau said. "This safety notice restricts commercial passenger flights from any air operator, both domestic and foreign, of the Boeing 737 Max 8 and 9 aircraft – from arriving, departing, or overflying Canadian airspace."

Shortly after, President Trump said from the White House that he will issue a similar banning order to America's aviation watchdog, the FAA.

Boeing immediately responded with a statement of its own backing the decision, as if it had any real choice or say in the matter. Its stock price, by the way, has plummeted from $440 apiece at the start of the month to $375 at time of writing.

"We are supporting this proactive step out of an abundance of caution. Safety is a core value at Boeing for as long as we have been building airplanes; and it always will be," CEO Dan Muilenberg said.

"There is no greater priority for our company and our industry. We are doing everything we can to understand the cause of the accidents in partnership with the investigators, deploy safety enhancements and help ensure this does not happen again."

The sweeping move by both North American countries comes as new details emerged about Boeing's efforts to address concerns over the anti-stall system, which is suspected to be the cause of recent deadly 737 Max crashes in Ethiopia and Indonesia.

According to the Dallas Morning News, airline pilots have been well aware of the safety system's problems for some time now, with repeated complaints being made to the FAA about the lack of information and training.

A separate report from the Wall Street Journal suggests that the FAA was well aware of the issues, and was working with Boeing to roll out a fix, but those efforts were hampered by the partial government shutdown that dragged out in the early weeks of the year thanks to a standoff between Congress and the White House over southern border wall costs.

Even after numerous countries began to ground the planes to save lives, Boeing execs were said to be lobbying the government to keep the aircraft, and their stock price, aloft. As late as Tuesday, Muilenberg was said to be personally in contact with President Trump to reassure the administration that the planes were safe to fly, effectively begging to allow operations to continue.

Shortly after, and possibly because, details of that telephone conversation surfaced, and with Canada bringing down the ban hammer, the FAA was allowed to ground 737 Maxes. ®