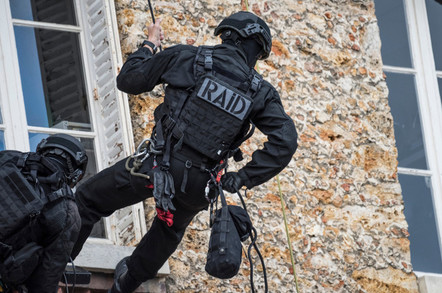 The raids almost certainly did not look like this.

The Information Commissioner's Office has been investigating the companies, based in Brighton and Birmingham, for a year after receiving roughly 600 complaints about them.

The calls – said to involve road traffic accidents, personal injury claims and household insurance – did not identify the firms or allow people to opt out of receiving them.

This is a breach of direct marketing rules, the Privacy and Electronic Communications Regulations (PECR), so the ICO today sent in enforcement officers to seize computer equipment and documents for analysis.

"Today's searches will fire a clear warning shot to business owners who operate outside the law by making nuisance marketing calls to people who have no wish to receive them," said Andy Curry, head of the anti-nuisance call team.

"The evidence seized will help us identify any illegal business activities and assist us to take enforcement action, which may include action against the directors, on behalf of the victims who have turned to us for help."

The ICO's ability (or lack thereof) to raid businesses suspected of breaking data protection or direct marketing laws was made famous during the Cambridge Analytica saga, when it was forced to go to court to gain a warrant.

Since then, the watchdog has been given greater powers to conduct no-notice inspections, as well as receiving streamlined warrants, which the commissioner recently said was as a direct result of that probe.

A secondary effect of the late-night raid on the Cambridge Analytica offices was that it made the enforcement officers' kit the envy of the data protection Twitterati.

The ICO was also last year granted the power to levy personal fines of up to £500,000 on the directors of dodgy-dialling companies in a bid to prevent execs from simply liquidating their companies to dodge penalties handed to them under PECR. ®