Amazon may finally get its hands on .amazon after world's DNS overseer loses patience

ICANN tired of delay tactics from Brazil and Peru 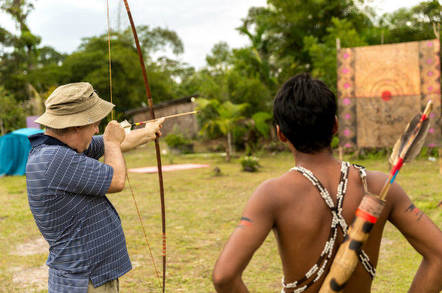 Amazon may finally get its hands on the .amazon top-level domain it craves, having been blocked for years by the governments of Brazil and Peru, after ICANN finally lost its patience.

In an exhaustive rundown of the bureaucratic battle that has been waged for seven years over the top-level domain, this week the ICANN Board explained it was giving the two sides four more weeks to reach an agreement.

The organization also made it clear, while couching it in painfully diplomatic language, that it was sick of the two countries' delaying tactics, which came to a head when they demanded a meeting with ICANN's CEO Goran Marby in Brasilia last month and then cancelled at the last minute.

Referring to the Amazon Cooperation Treaty Organization (ACTO), which the countries have been operating through to block the .amazon application, ICANN noted: "ACTO again invited the President and CEO to attend a meeting in Brasilia between 12 and 19 February 2019 to talk with ACTO member states regarding the Amazon Applications; ICANN's President and CEO accepted the invitation and the meeting was scheduled for 19 February 2019."

It then notes: "On 13 February 2019, ACTO cancelled the upcoming meeting in Brasilia, and provided no new dates… On 28 February 2019, ACTO requested that the Board not take a final decision on the Amazon Applications… but did not suggest a time for such discussions."

ICANN said back in January that it would make a decision on .amazon at its meeting this week in Japan but even after they cancelled the Brazilia meeting at the last minute, the countries then said they couldn't participate in a call that Marby set up for 9 March. He's clearly had enough.

Please don't make us upset you

ICANN is desperate to avoid a confrontation with governments, and in fact kowtowed to their wishes for several years, putting the .amazon application in a special no-man's-land status. The governments know it too, to the extent that at one point they told ICANN that they – and no one else – are allowed to "identify the public policy issues that may justify the Board to adopt certain decisions."

But the Amazon corporation was equally determined and forced ICANN through each of its multiple review procedures before finally winning at the final and only independent review, the Independent Review Process (IRP).

ICANN had repeatedly broken its own bylaws, the report [PDF] noted, and "failed in its duty to explain and give adequate reasons for its decision" adding that there was an "absence of any rationale" for denying the application.

It recommended that ICANN "promptly re-evaluate Amazon's applications" and "make an objective and independent judgment regarding whether there are, in fact, well-founded, merits-based public policy reasons for denying Amazon’s applications." And it made ICANN pay for the full cost of the proceeding: $315,000.

But rather than make a decision that would anger governments, ICANN buried the issue in a bureaucratic back-and-forth that went on a further six months without any resolution. It later emerged that Amazon had offered millions of dollars worth of free Kindle e-readers and hosting in return for Brazil and Peru removing their objections, but to no avail.

Under pressure from Amazon, ICANN told its CEO to personally "facilitate negotiations" between the two and another six months went by with nothing happening.

Finally, in October 2018 – six years and six months since the governments had first objected – the ICANN Board lifted .amazon's "will not proceed" status and told its CEO again to resolve the issue. Again, no progress was made, and so in January, the ICANN Board indicated it was going to approve the applications, prompting an angry response from ACTO, which demanded a meeting - that it then cancelled.

Seemingly taking a leaf from the UK government's Brexit approach of delaying a vote while hoping that a solution will magically present itself, ICANN has given the two sides until 7 April to come up with an agreement.

If they don't – and they won't – it then gives Amazon another two weeks to "submit a proposal on how it will address the ACTO member states continuing concerns regarding the Amazon Applications."

And then the ICANN Board will look again at the issue – but it doesn't give itself a deadline for that review. Even after all that, ICANN points out that it "might refer the proposal back to the Amazon corporation for additional work; or might determine not to delegate the strings associated with the Amazon Applications."

What makes the situation all the more ridiculous is that Brazil and Peru weren't originally bothered by the .amazon application (the region actually goes by the name "Amazonas" or "Amazonia") but became suddenly upset shortly after then-president of Brazil Dilma Rousseff found out through the Snowden documents that the US government had been bugging her mobile phone.

And, of course, there is no need for a river to have its own internet extension, and the fact that .amazon domain names may exist on the internet and be used to sell products has no actual impact on the Amazon or the people that live in the Amazonas region, most of whom don't even have an internet connection.

While the whole sorry affair reveals that ICANN has turned into the exact sort of organization that it was set up to avoid – one where governments get to make the decisions regardless of facts, reason, or process. There is still some measure of hope that at some point this year it will be forced into making a "well-founded, merits-based public policy" decision – as the retired judges suggested two years ago.

There are a lot of reasons not to like Amazon the corporation but in this case the company's enormous resources and stubborn determination may still force some degree of accountability onto the body that oversees the internet's domain name system. ®