'What's up, Skip?' asks paraglider – before 'roo beats the snot out of him

He was landing. Marsupials have not yet developed flight 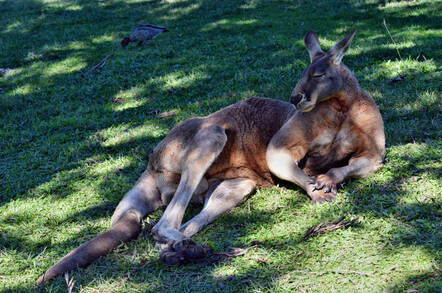 Stand well back unless you want to be gutted

As if we needed another reminder that everything in Australia wants to kill you, the ongoing turf war between kangaroos and people has claimed another victim.

Innocent paraglider Jonathan Bishop was landing at Orroral Valley in Namadgi National Park, near the capital city of Canberra, when his GoPro helmet cam caught an approaching contingent of marsupial thugs.

Though they'd have no difficulty kicking off a human's head, a clueless Bishop leaned back on media's worst mischaracterisation of the kangaroo.

"What's up, Skip?" 35-year-old Bishop can be heard asking the oncoming knot of muscle and rage.

To which the 'roo replied with a flurry of fists and claws.

"Hey fuck off, ahh fuck off! Go away!" Bishop screamed, concluding "fuckin' kangaroos" once the hit-and-run gang had scarpered.

9 News said that the extreme sports fan was none the worse for wear despite the brief pummelling.

Unconfirmed reports (ie, we're making it up) suggest the attack was a reprisal for the brutal hook a man inflicted on a kangaroo that had his dog in a headlock back in 2016.

As yet, there is no end to the violence in sight. However, maybe some JD Sports vouchers might encourage the sluggers to put their fists down. ®