Infosec skills are useful. But so are locked doors 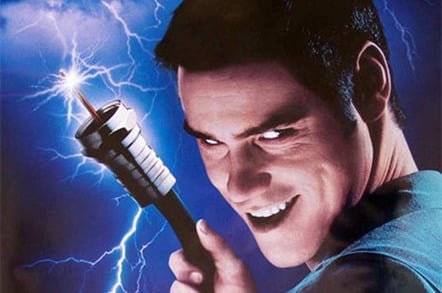 We imagine the reporters looked exactly like this once inside. Pic: Columbia Pictures Corporation

Journalists were able to bimble into a UK cable landing station almost completely unchallenged after security gates were left open and unlocked.

Two reporters from the Mail on Sunday walked straight into the nondescript hut where the Hibernia Express cable reaches the British mainland in Southport, 30km north of Liverpool on the Irish Sea coast. The cable is the fastest transatlantic fibre optic route for internet traffic between the UK and North America.

"A terrorist or foreign agent would have been free to plant explosives or force their way inside," reported the paper.

The hut, the precise location of which El Reg is not disclosing (even if we described it in great detail it's a right sod to find on Google Earth), "stands at one end of a car park used to store about 20 caravans", according to the Mail on Sunday. A group of visiting engineers had rather carelessly left all of the doors and gates wide open behind them, allowing the reporters to stick their heads in and ask questions.

However, although CCTV had been installed on site, the reporters' snooping was not immediately challenged. A few years ago the then-head of the Armed Forces, Air Chief Marshal Sir Stu Peach, warned that undersea fibre optic cables were at risk from Russia and similar enemies of the West. But the air marshal was referring to military action at sea – cutting or tapping cables – instead of targeting them on land.

Hibernia was bought out by GTT Communications in 2017. A spokesman told the Mail that its cable landing stations "have security built into their core and resilience measures in place that mean any interruption of service would not materially impact internet traffic".

When The Register exclusively revealed that spy agency GCHQ had established a cable-tapping base in Seeb, Oman, we named Hibernia Atlantic as one of the domestic cables that was subject to illicit interception. Intriguingly, given the current situation around security, Hibernia was told to stop construction work on Hibernia Express in 2013 over the involvement of Huawei Marine in providing some of the equipment for its operation. Huawei was duly replaced by TE Subcom, a US firm.

Physical security is increasingly overlooked in British national cybersecurity considerations. Last week the government published its response to a Parliamentary report demanding greater software skills and training for critical national infrastructure companies. While unquestionably of vital importance, it's no good being able to fend off all the North Korean botnets in the world if Bogdan the Church Spire Tourist can knacker the nation's comms with a handful of plastic explosive. ®

ACM Sir Stuart Peach is right – but only to a point

Captain likely to walk the plank

No, Russia is not tapping into Syria's undersea internet cables

A tale of the spy ship Yantar, tinfoil hats and that pesky bugger we call reality